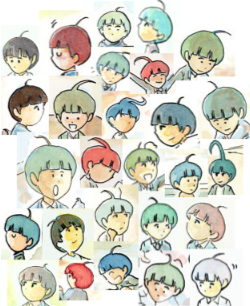 Hair Colors are an easy way to distinguish one person from another at a glance. At times, it might drive a person to dye or even bleach their own hair to change its color (blonde is a common goal, due to the stereotypes of it being more glamorous). But some people aren't satisified with just one hair color. Oh no. Their hair has to keep changing color frequently. The new shade can be common, implausible, or even outright impossible. The changes must happen a number of times, and they may be justified by use of hair dye, or any sort of Applied Phlebotinum—up to and including actual Magic (though it's not necessarily a case of Magic Hair). It doesn't even have to happen to real hair, so characters who constantly swap wig colors come under this trope.

The color changes may pass without comment from others in the work, or drive someone up a wall trying to figure things out. Sometimes, even the subject of the changes might not appear to notice or care; in other cases, they might be pleased. The changes can be accompanied by a makeover, but this is less likely if they take place regularly or are a result of mood swings. Hilarity can ensue if the character hates what happens to their hair while being powerless to stop it.

This trope can occur in any medium, but some are more common than others (e.g. video game examples are near non-existant). Naturally, this includes Real Life, though due to the effects of repeated dyeing [1] most people don’t do it. Due to happening many times on a single person, it isn’t a type of Expository Hairstyle Change. Usually.

Compare Kaleidoscope Eyes for the same thing in a different place, and Multicolored Hair, which is strictly about hair that is simultaneously of multiple colors/shades. Of course, the two tropes may overlap sometimes. Compare and contrast Expressive Hair, when the hair changes style. Supertrope to Power Dyes Your Hair, where the color change only occurs due to a transformative power-up.

One of the Common Mary Sue Traits, along with being a way to give someone a Distinctive Appearance. See also Locked Into Strangeness, for permanent hair colour changes. May be a result of someone just wanting to be special or Anime Hair (where it can overlap with You Gotta Have Blue Hair). Voluntary Shapeshifters often have this, as can some stereotypes of teenagers.

Examples of Kaleidoscope Hair include:

Retrieved from "https://allthetropes.org/w/index.php?title=Kaleidoscope_Hair&oldid=1499228"
Categories:
Cookies help us deliver our services. By using our services, you agree to our use of cookies.