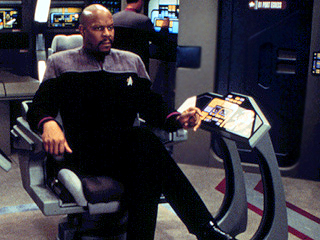 This is most often seen in science fiction shows and video games, where (as the title implies) there is a futuristic democracy where the president (or other leader) is a black...and bald guy. The rest of the "council" or "committee" or "parliament" will be completely or almost completely whitewashed, and he will be the only black guy there. Apparently, there is something about being both bald and black which makes a leader popular enough to be elected, and that something doesn't work when you only have one of the two. This can also apply to leaders of other sorts of groups as well, as long as those groups are "good".

A possible reason for this trope is that both baldness and blackness are seen as being hyper-masculine, so if you want your leader to be a Manly Man, you make him bald and black. Baldness is masculine because male-pattern baldness tends to result from high levels of testosterone literally burning out the hair follicles that it stimulates. Blackness is commonly seen as masculine because the definitions of masculinity, much like most things, have become racialized in a way that reinforces certain stereotypes about non-white people. More specifically, the archaic idea that people of African ancestry (of both genders) are better suited to hard, physical labor than the supposedly superior white planters has survived to this day in the form of hyper-masculine imagery of black men (to say nothing of...other stereotypes of black masculinity). Then, of course, there is the notion that black men supposedly—and frequently do—pull off the bald look better than white men.[1]

One possible reason for the "bald" part of this trope is that for black men to reach positions of authority in the Western world, they usually have to cut their hair very short. When left to grow naturally, a black person's hair can grow into what is normally called the "Afro" style. This hair style is often frowned upon in formal environments such as business or politics. See Funny Afro. As the afro is a natural racial trait for many black people, this can lead to Unfortunate Implications.

Possibly a form of a Token Minority. See also Bald of Awesome. His significantly less bald Distaff Counterpart is the Black Boss Lady.

Please make sure the character is actually bald when you post him. The buzz cut is quite popular among black men and is not the same thing as having no hair at all, and thus Barack Obama (for example) would not count unless he were to shave his head at some point in his term. There's a lot of space between "bald" and "afro".

Leader: The world around us has turned completely to shit, but aliens are putting out a brainwave that keeps most people seeing a false reality.
Stan: Aliens?
Leader: ...or robots from the future. Whatever.
[Later]
Leader: (Firing shotgun) You vampire sons-of-bitches!