Everything About Fiction You Never Wanted to Know.
Jump to navigation Jump to search
/wiki/Laurel and Hardycreator 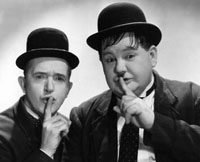 Laurel (left) and Hardy (right) in their iconic bowler hats.

Stan Laurel (16 June, 1890 – 23 February, 1965) and Oliver Hardy (18 January, 1892 – 7 August, 1957) are an early 20th century comedy double-act famous for visual-slapstick humour. Among the most enduringly famous of Laurel and Hardy's works are The Music Box, which features two workers' Sisyphean attempts to move a piano up several flights of stairs, and Babes in Toyland.

Laurel and Hardy got their start as a duo with director Hal Roach's Hal Roach Studios in the late 1920s, and occasionally worked with bigger studios such as RKO and MGM. They are notable for their successful transition from silent-era film to "talkies", and were extremely prolific throughout the late '20s and the '30s. In later years they also toured extensively as stage performers.

Though the pair's sketches were often the result of a team of writers, Stan Laurel was something of an "idea man" who rewrote segments of scripts and did a lot of improvising.

Laurel and Hardy films with their own pages on this wiki:

Laurel and Hardy provides examples of the following tropes:
Retrieved from "https://allthetropes.org/w/index.php?title=Laurel_and_Hardy&oldid=1830245"
Categories:
Cookies help us deliver our services. By using our services, you agree to our use of cookies.