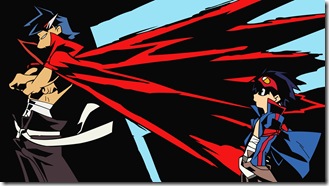 Guess which of these two is the main character! [1]

So you've got your hero. He's practically has a giant neon sign over his head that says he's a hero. It might be subtle, but it's fairly obvious you've found the guy who'll save the day, get the girl, and live a long and hap—what the? Did he just get bitten in half by a mutant T. Rex?

Some books, films, or games like to mix things up and throw viewers for a loop by revealing that the Standardized Leader isn't The Hero. This can be very dramatic; there are few more effective ways to showcase Anyone Can Die than taking out the apparent protagonist. It can also be used comedically, revealing that the guy who thinks he's the protagonist is just a glorified bit player. Sometimes the Decoy Protagonist will turn out to be the antagonist.

Intro-Only Point of View frequently is used to emphasis his importance before The Reveal.

What happens next is the guy we perceive of as The Lancer, Sidekick, or even a fringe loner takes center stage as the real protagonist (maybe even Hero). Usually they reveal a much greater level of personal integrity and strength of will than previously thought, despite their Dark and Troubled Past.

Note that this does not necessarily involve the death of the initial protagonist, although that is often how this trope expresses itself. If the target actually dies, they're often a Sacrificial Lion. If the character actually was The Hero, see Take Up My Sword. Also see Dead Star Walking.

In video games, this can overlap with And Now for Someone Completely Different; compare First-Person Peripheral Narrator, where the narrator is obviously not the protagonist. For the villainous version of this trope, see Disc One Final Boss.

Not to be confused with Supporting Protagonist, which is simply that the focus is on another character than the hero, or Fake Ultimate Hero, who doesn't appear to be the protagonist.

As this is frequently a Death Trope, beware spoilers:

Examples of Decoy Protagonist include:

Retrieved from "https://allthetropes.org/w/index.php?title=Decoy_Protagonist&oldid=1706112"
Categories:
Cookies help us deliver our services. By using our services, you agree to our use of cookies.