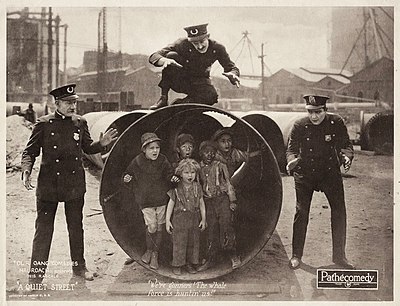 Hal Roach created this series of short comedy films in the 1920s. During the silent years (1922–28), Roach tried such titles as Hal Roach's Rascals and The Terrible Ten, but since the first short was titled Our Gang, moviegoers started calling them the "Our Gang Comedies". The child cast changed almost annually until the series ended in 1944.

In 1949 Metro Goldwyn Mayer, which had purchased the series from Roach in 1938, sold the films back to him but retained the rights to the Our Gang name. When Roach packaged the films for television syndication in the mid-'50s, the series was retitled The Little Rascals (leading to a certain amount of Title Confusion over the years).

Tropes used in The Little Rascals include:

Tropes specific to the Hanna-Barbera version

Tropes specific to the 1994 movie

Retrieved from "https://allthetropes.org/w/index.php?title=The_Little_Rascals&oldid=1929194"
Categories:
Cookies help us deliver our services. By using our services, you agree to our use of cookies.