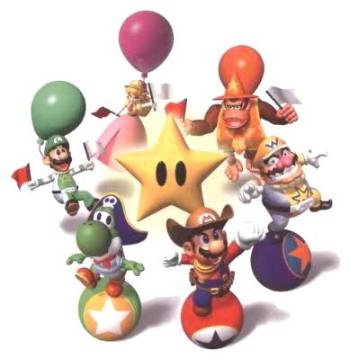 Just another day living 10 coins at a time.

This long-running series of multiplayer games for Nintendo 64, Game Cube, Game Boy Advance, Wii, and DS, developed by Hudson Soft but published by Nintendo (though since Hudson's acquisition by Konami, the 9th game is developed by Nd Cube, developers of Wii Party) combines a board-game motif with various competitive mini-games. Besides Mario, Luigi and their friends, some of the enemies from Super Mario Bros.. are playable characters in the Mario Party series. About a dozen Mario Party games have been released so far: nine on home consoles, one on the Game Boy Advance, one for the e-Reader (actually a non-collectible card game with included minigames), one on the Nintendo DS, and two in arcades.

The basic format of the game has mostly remained the same. Four players (Computers filling in if there aren't enough human players) take turns rolling dice to move across one of several themed boards, with the ultimate goal of obtaining Stars, which are classically obtained by a player who reaches a Star Space and buys a star for 20 Coins, after which the Star Space is moved to a random location on the board.

After all players have had their turn, a mini-game begins. The players are placed on Blue or Red teams based on what spaces they had landed on (Green players are randomly marked Blue or Red) and a roulette begins to pick a game. The winner(s) of these games are typically awarded with 10 coins (in the first Mario Party the loser(s) may lose coins), although there are special games where the goal is to collect coins, in which case everyone gets to take however many coins they collected in the game with them.

Mario Party 9 changed the board game concept to have one ship that all the players take turns captaining. Mini-games only start when a mini-game space is landed on (and sometimes at random on blue spaces). Coins are gone, and stars are replaced with mini-stars, which are collected several at a time both on the board and in mini-games.

All of the games (With the exception of 1, 2, and 6) include some form of Single-Player campaign, which typically involves playing against computers on the game boards, but the mechanics may be slightly different.

Games in this series

Tropes used in Mario Party include:
Retrieved from "https://allthetropes.org/w/index.php?title=Mario_Party&oldid=1680054"
Categories:
Cookies help us deliver our services. By using our services, you agree to our use of cookies.