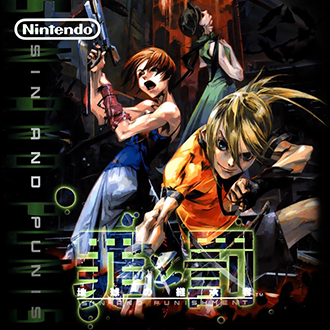 Sin and Punishment (subtitled "Successor of the Earth") is an action game developed by Treasure and Nintendo R&D 1 released in Japan for the Nintendo 64 in 2000. It is best described as a rail shooter, though its game engine requires platforming and evasive maneuvering along the way. The playable characters move independently of their shooting, which is done using a combination gun and sword that can be set to lock onto targets or be aimed manually with higher damage output. The sword can be used at close range, and well-timed slices can deflect projectile attacks toward other opponents.

The story takes place in Japan in the year 2007. A horde of rampaging mutant creatures known as Ruffians is attacking humanity. In response, a volunteer army is formed to defend against them, led by a man named Brad. But even his group is causing problems for everyone, so a Mysterious Waif named Achi forms another group devoted to defending against Ruffians and army members alike.

As the story begins, all but three of the group's members are slaughtered: Achi and the two protagonists, Saki Amamiya and Airan Jo. Refusing to give up, they head out to destroy those responsible. Yes, this is an incredibly short summary, but that's because it's such a short game that it can be beaten in an hour. Despite the short length, it's still something of a Mind Screw.

No, this game is not a Widget Series. Sin and Punishment was originally supposed to be an American release. The plan was foiled when the Nintendo 64 stopped production in the US earlier than expected, and it was first seen on Western shores when it was launched on the Wii's Virtual Console in late 2007. It required almost no localization, since all of the spoken dialog was already in English. Due to its popularity on the Virtual Console, a sequel was released in 2009 in Japan, May 2010 in Europe, and June 2010 in the US. In addition, Saki made a cameo appearance in Super Smash Bros.. Brawl as an assist trophy.

Not to be confused with Persona 2.

Note: the sequel has its own page. Tropes pertaining to it should go there.

Tropes used in Sin and Punishment include:
Retrieved from "https://allthetropes.org/w/index.php?title=Sin_and_Punishment&oldid=1683630"
Categories:
Cookies help us deliver our services. By using our services, you agree to our use of cookies.