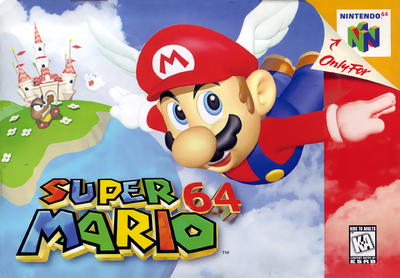 Princess Toadstool, er, Peach has invited Mario to come to the castle, having been told there would be cake. However, when Mario gets to the castle, he is instead greeted by Bowser, who has once again kidnapped Peach. He has also imprisoned the castle's 120 Power Stars into paintings around the castle that are portals to other worlds! This looks like a job for Super Mario!

Though not the first 3-D platformer, Super Mario 64 is heralded by gamers as one giant leap from 2-D gaming to 3-D gaming, and its influence on the platforming genre from the greatly fleshed out Hub World to its nonlinear gameplay has been felt ever since. Notably for the Mario series, this game places a heavier emphasis on exploration and puzzle-solving than most games in the series.

Super Mario 64 was later brought back to usher in Nintendo's first portable 3D system as Super Mario 64 DS. This version brought the total stars up to 150 from the original game's 120, shifted some of the original stars around (while removing others), added a few new levels and bosses, included multiplayer, and had four playable characters (Yoshi, Mario, Luigi, and Wario).

Retrieved from "https://allthetropes.org/w/index.php?title=Super_Mario_64&oldid=1693315"
Categories:
Cookies help us deliver our services. By using our services, you agree to our use of cookies.