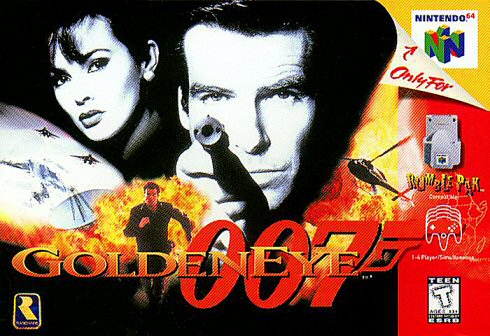 GoldenEye is a FPS video game adaptation of the James Bond |movie of the same name, made by Rare for the Nintendo 64 (known by some as GoldenEye 007, after the box art).

The majority of the game's missions are directly lifted from the film, with some slight alterations and omissions. Several hidden missions were also included for gamers good enough to reach them; these were inspired by other Bond movies. The game's split-screen multi-player mode allowed players to control classic Bond villains (and, through the help of cheat devices, the other four Bonds), and featured many different gameplay combinations based on weapon selection and game rules (including "You Only Live Twice" [where you get two lives, and that's it] and "License to Kill" [one hit kills, no matter the gun, except the Klobb sometimes]).

In November 2010, a remake by Activision for the Wii was released. Click here for more details.

007, remember to treat the timed explosives with respect - you know what happened to 004 in Beirut.