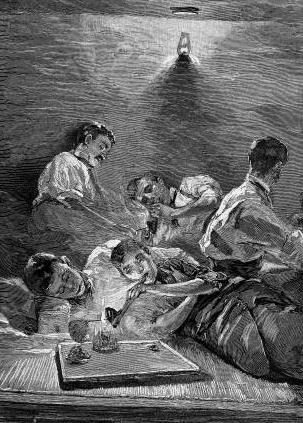 The door opens into warm darkness. The air is filled with smoke, its bitter-sweet scent undercut by a faint stink of sweat and bile. An attendant scurries toward you, seemingly out of nowhere, bearing a pipe and a pill of opium.

You settle into the lower level of a two-tiered bunk much like a train sleeping compartment. Declining to close the curtain—that is for those already drugged to either stupefaction or hypersensitivity—you cast your eyes about the room as the first breaths of hot vapor connect with your lungs. Around you are men and women of every conceivable race and class, some silent in contemplation of their private fantasies, others talking to or amongst themselves in strange accents and hushed tones. They coexist in a peaceful single-mindedness that would be the envy of church or state.

This is not a luxurious place, not a picture-postcard place in red and gilt. The wooden walls know neither paint nor plaster; the floor is grimy; the air is close. But to the habitué, it is paradise.

The image of the opium den is often romanticized, probably because few such places still exist. The media are more realistic in portraying other places where drug users gather to get high, such as "shooting galleries" (where addicts gather to inject drugs, usually heroin) and crack houses.

Opium use was known as "kicking the gong (around)", thus explaining the use of that phrase in many jazz songs.

Historically associated with Chinese culture, but not all are from that area. Limehouse, in London Town, was not actually that bad at all (the actual reason for the prevalence of this trope is, to cut a long story short, that in the 1800s the British virtually got everyone in China hooked on opium because the Chinese had a lot of stuff the British wanted to buy, but the British had nearly nothing the Chinese wanted).

Not to be confused with Opus Dei.

Examples of Opium Den include:

Retrieved from "https://allthetropes.org/w/index.php?title=Opium_Den&oldid=1655637"
Categories:
Cookies help us deliver our services. By using our services, you agree to our use of cookies.