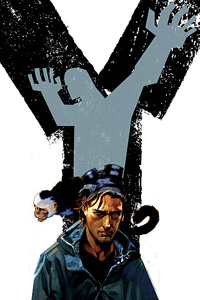 Is he doing the Randy Orton pose in the background?

That is the premise of Y: The Last Man, a Vertigo Comics comic book that, at some point, will be a movie as well...maybe. Written by Brian K. Vaughan (creator and original author for Runaways and Ex Machina), it tells the story of Yorick, a New York City escape artist who, along with his pet monkey Ampersand (&), somehow stayed alive while all other male mammals, from spermatozoa to giraffes to New York City Hall employees, suddenly died.

Being the Last of His Kind, or, in his case, sex, would be a good thing for an egotistical Lothario, but Yorick has in mind nothing but finding his Perfect Girlfriend, Beth, who was traveling in Australia on the day of the disaster. Complicating this quest, Washington DC is going through a war between Democratic senators and Republican widows, while the rest of the Eastern Seaboard is suffering from attacks by the Daughters of the Amazon, a female supremacy gang lead by Victoria, a charismatic but insane chess prodigy (Or so she claims).

In the rest of the world, Israel (having a considerable contingent of female troops) is now a belligerent military superpower while Australia (one of the few nations to use female submariners) rules the Pacific. Yorick's efforts at reuniting with Beth, finding the cause of the Gendercide and having himself and Ampersand cloned are repeatedly foiled as he, a scientist and a secret agent travel to California and beyond in a series of "adventures" which nicely subvert the standard After the End type of plot.

The comic, drawn in realistic western style by Pia Guerra and written by Brian K Vaughn, is famous for refusing to be an Author Tract even when its plot is just asking for it.

Help out with the character sheet.

Tropes used in Y: The Last Man include:
Retrieved from "https://allthetropes.org/w/index.php?title=Y:_The_Last_Man&oldid=1786559"
Categories:
Cookies help us deliver our services. By using our services, you agree to our use of cookies.