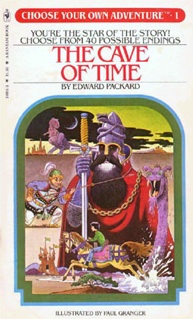 Gamebooks that are Interactive Fiction and a paper Adventure Game. The player advances the action by reading a short passage describing a scene and choosing one of several actions. To take that action, the player reads a numbered section in the book. The eponymous Choose Your Own Adventure series is a famous and highly successful example of the gamebook genre with 250 million copies in print. The peak of the gamebook craze came in the 1980s, but the form is far from dead.

Occasionally there is a limited role for chance and player attributes in fighting and feats of skill. Mapping and note taking is often needed in more complex works. There are typically more ways of failing and/or dying than succeeding. Death sometimes comes in horribly inventive ways, yielding textual Ludicrous Gibs.

Success often depends on a combination of luck, possession of difficult to obtain items and sometimes manipulation of the entry number to reach an entry unavailable any other way. Lock And Key Puzzles abound. Sometimes these puzzles are so obscure and unintuitive they are Solve the Soup Cans puzzles.

The directed graph of entries for a book can contain alternate paths to the same destination, loops, and occasionally island entries unreachable from any legitimate point in the book. Sometimes these unreachable entries are used to humourly scold the reader for cheating. On rare occasions, these islands have included the best ending/only ending in which the PC survives, rendering the whole thing Unwinnable.

Gamebooks are a rich vein of fantasy, science fiction and RPG tropes. Illustrations are a key element in setting the mood of a gamebook world. Second Person Narration is nearly universal.

Many Tabletop RPG rulebooks include a short (under 100 scenes) example of this trope, where the reader uses the game system (and a pre-generated character) as the randomizing element, as a way of teaching the rules and RPG concepts.

Several people have written scripts for Internet gamebooks allowing the players to add new pages. The results are... interesting.

Examples of Choose Your Own Adventure include:

Examples in other media

Retrieved from "https://allthetropes.org/w/index.php?title=Choose_Your_Own_Adventure&oldid=1947762"
Categories:
Cookies help us deliver our services. By using our services, you agree to our use of cookies.