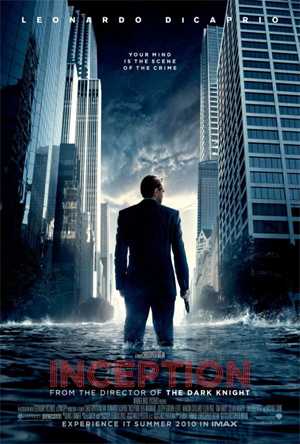 Inception, a 2010 film from director Christopher Nolan, works like a heist film in reverse: instead of taking something, the main character must leave something behind.

Dom Cobb (Leonardo DiCaprio) works as a freelance "extractor": using a briefcase-full of Applied Phlebotinum and several allies to help him, Cobb enters his targets' dreams and steals valuable information. Cobb's extraction skills make him a great thief, but they've also made him a fugitive, leaving him unable to return home to his family. When an attempt to extract information from a Japanese businessman named Saito (Ken Watanabe) goes wrong, Cobb goes on the run from his current employers.

Saito catches up with Cobb and makes the extractor an offer: his status as a fugitive will be wiped clean -- which would allow him to go home -- if he can manage to perform an inception on one of Saito's rivals. Whereas extraction involves stealing ideas or information already in somebody's head, inception involves the insertion of an idea into someone's head in a way where the target believes they independently conceived the idea.

Dom accepts Saito's proposal, even though it has one small catch: nobody has ever pulled off a successful inception.

To attempt the impossible, Cobb assembles a Badass Crew of experts: longtime extraction partner Arthur, dreamworld-building architect Ariadne, expert forger Eames, and chemist Yusuf (who devises the compounds that make extraction possible). Cobb's group works their way into the target's mind, but a complication Cobb failed to warn them about arises: inside the dream world, Cobb's own subconscious makes for a worse enemy than their target's.

Nolan wants to make a game set in the movie's universe (Obviously, the game will have four levels).

Tropes used in Inception include:

Some of the actors that previously appeared in The Dark Knight Trilogy appear here with their situations changed. Cillian Murphy is the one being mind raped, starting with a dose of drugged water, Ken Watanabe again "dies" in an exploding fortress atop a snowy mountain, and Michael Caine plays the mentor/father figure to the main character. Tom Hardy, Joseph Gordon-Levitt and Marion Cotillard are all playing roles in The Dark Knight Rises. Nolan has built himself quite a Production Posse.

However, the Mooks from the corporation who hunt Cobb and Arthur in what is allegedly the real world absolutely live by this trope. Two of them are equipped with semi-auto handguns and can't hit Cobb while he is running just few feet from them in the alleyway in Mombasa.

As each dream level has a timed kick, and time slows down further with each level downward, the twist is that if you don't make one kick, you're stuck having to possibly wait what feels like years in the lower level. Stuck there while everyone is trying to kill you, as someone the level above you arranges another kick -- if they can do it before being taken by a higher kick themselves. Therefore, the reward the characters get for beating one clock? Beating several more clocks.

Retrieved from "https://allthetropes.org/w/index.php?title=Inception&oldid=1874540"
Categories:
Cookies help us deliver our services. By using our services, you agree to our use of cookies.