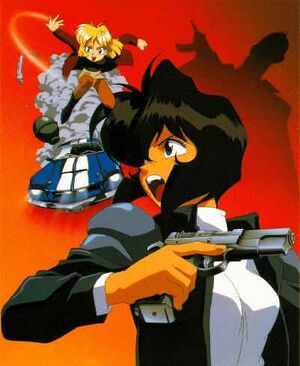 Gunsmith Cats is a manga and anime about the action-packed story of gunsmith/bounty hunter Irene "Rally" Vincent and her teenaged partner Minnie May Hopkins, a precocious explosives enthusiast with a penchant for hand-made grenades that emit pink smoke.

Three OVA episodes were made, which is not nearly enough to get into the extended story that runs through the original manga (and its sequel series, Burst). Instead, it settles for being a short, episodic, high-energy action-adventure story with a lot of fast cars, loud explosions and vigorous gunplay. Created by Kenichi Sonoda, the famed character designer for Bubblegum Crisis, Gunsmith Cats is descended from an OVA called Riding Bean. Riding Bean featured Rally as the partner of Bean Bandit, a professional wheelman with a soft spot for kids. Bean would later appear in Gunsmith Cats first as an adversary, then later as an ally and friend of Rally's.

Gunsmith Cats is noteworthy for the degree of research and accuracy it possesses. The action takes place in Chicago, and the entire animation team visited the city to scout locations and take reference photographs. So accurate is this attention to detail that many Chicago fans of the series can identify specific intersections, and even the time-period the anime was made by certain key features, most notably the construction scaffolding that surrounded the Field Museum of Natural History during that building's renovation. Storefronts tend to look remarkably similar to actual stores near the locales, and even such things as stoplight specifics have been attended to. Also, all the cars and guns are rendered with precise, technically-accurate detail, and their sound effects recorded especially for the anime from the real thing (for example, the roar of Rally's Shelby GT-500 Mustang was recorded off an actual GT tricked out with exactly the same options as its animated counterpart).

Tropes used in Gunsmith Cats include:
Retrieved from "https://allthetropes.org/w/index.php?title=Gunsmith_Cats&oldid=1843722"
Categories:
Cookies help us deliver our services. By using our services, you agree to our use of cookies.