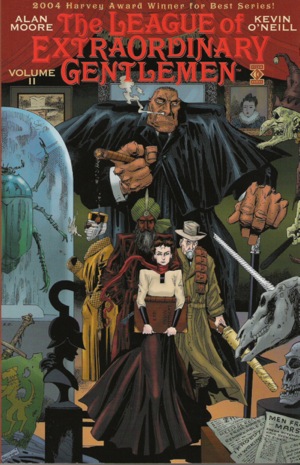 Not to be confused with The League of Gentlemen, which is something entirely different. (Although they might be in here somewhere...)

Writer Alan Moore and artist Kevin O'Neill's vision of a Superhero team, like the X-Men or the Justice League of America, set in the world of Victorian English penny-dreadful adventure stories. Moore combined public domain characters from the period, hundreds in total, into a coherent whole. The first volume of the series was published from March, 1999 to September, 2000.

Other notable characters include Professor Moriarty and Mycroft Holmes from the Holmesian canon. (The great detective himself only appears in a Flash Back, as he would overshadow the other figures; at the time of the story, he's off faking his death around Europe.) A proposed ancestor to a certain superspy is introduced in the person of Campion Bond: a priggish, rotund, cowardly, sanctimonious schemer with no redeeming qualities whatsoever. His family's got quite the reputation; quite the bad one.

The Literary Agent Hypothesis is used as a plot point; the authors of the original stories are depicted as biographers, and the "real" events surrounding the league's members are often far more disturbing than the tales would have us believe. For instance, all the members except Murray are believed dead, having faked their own demises years before.

Volume 1 follows the tale of the league's formation, and a battle against the forces of the mysterious "Chinese Doctor" (actually Fu Manchu) and the machinations of Moriarty. In the second volume, the Martian invasion from The War of the Worlds is explored, featuring appearances by Dr. Moreau and John Carter of Mars. The "Black Dossier," an elaborate side-story, features the titular Dossier as a Framing Device for the history of all the different iterations of the League, from the one in Shakespeare's time through to World War II, and brings the references to a truly ridiculous level. The Black Dossier signalled a change in style for the comics; where the initial idea was "Justice League of Victorian England", the ambition evolved into creating a shared universe for all fictional places and characters. All of them.

The first part of the third volume, "Century" was published in 2009, setting up an End of the World as We Know It arc spanning the 20th and early 21st century. In 1910, the League investigates a doomsday cult led by magician Oliver Haddo, while simultaneously dealing with a madman killing prostitutes on the waterfront. New members of the League include psychic detective Thomas Carnacki, who has been having visions of what's to come, high-class cracksman A.J. Raffles, and League veteran Orlando, as headstrong, omnisexual, and perpetually bored as ever. As this is going on, the dying Captain Nemo's daughter Janni has come to London to escape her father's plan to make her his successor, taking up work at a tavern on the waterfront. And there are musical numbers. Lots of them.

The second volume of Century, published July 2011, finds the league back in swinging London in 1969. The team is down to just Orlando, Mina and Allan, but they get a ride from the octogenarian Janni on the Nautilus. They must seek out and stop the cult founded by the late Oliver Haddo and prevent him from using popular musicians for dark purposes.

The sheer number of sly references to Victoriana that are found in the pages of League's first two volumes astound many scholars; each page includes subtle and overt Continuity Nods to British literary tradition and culture, everything from Rupert Bear and other classic Talking Animal characters as Moreau's hybrid monsters, to a Cottingley Fairy in a jar of alcohol at the British Museum. On the other hand, they usually take these references in so horrifying a direction that it's sometimes more insulting if you recognize them. The trend continues with more contemporary fiction in the later volumes, often with clever Writing Around Trademarks, as these works aren't public domain.

Tropes used in The League of Extraordinary Gentlemen include:
Retrieved from "https://allthetropes.org/w/index.php?title=The_League_of_Extraordinary_Gentlemen&oldid=1962404"
Categories:
Cookies help us deliver our services. By using our services, you agree to our use of cookies.