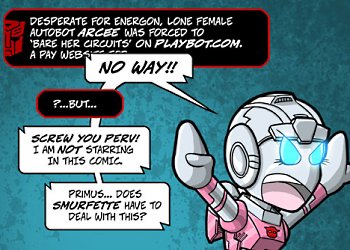 Arcee is certainly not doing some cheap Fan Service, thank you very much.

Happens when a character knows that a trope is about to happen, either due to being Genre Savvy or because someone is trying to invoke it, and then actively attempts to avert it, subvert it, or maybe even invert it.

The character might succeed, or might fail. In failing, he might even set the trope off. The point is that the character is at least attempting to avoid a straight run of the trope.

Compare Reality Ensues (which this may sometimes lead to).

Not to be confused with a simple Averted Trope, which has no prompting from any characters.

Also not to be confused with Deified Trope.

Examples of Defied Trope include:

Retrieved from "https://allthetropes.org/w/index.php?title=Defied_Trope&oldid=1676126"
Categories:
Cookies help us deliver our services. By using our services, you agree to our use of cookies.