Everything About Fiction You Never Wanted to Know.
Jump to navigation Jump to search
/wiki/R. Lee Ermeycreator 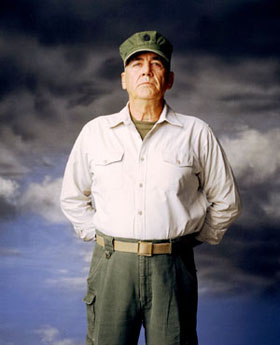 Gunnery Sergeant R. Lee Ermey (1944-2018) was a U.S. Marine Corps drill instructor turned actor/media personality. Ermey became a pop culture icon off of his brief but memorable role in the Stanley Kubrick film Full Metal Jacket, which had him play a foul-mouthed drill instructor whose sadistic training methods ends up driving one recruit insane and led to his death; incidentally, his scenes are one of the few times in which Kubrick allowed improvisation in any of his films.

The role made him the poster child for the trope Drill Sergeant Nasty and landed him work in other films (most notably Se7en, where he ironically plays against type as a rather mellowed out police captain), as well as a slew of voice-over work due to his distinct gruff voice, and ultimately a hosting job for several History Channel military-themed shows (Mail Call and Lock n' Load with R. Lee Ermey). He also guest-starred as the abusive ex-Drill Sergeant Nasty father of the title character of House.

He actually retired from the marines as a Staff Sergeant. In 2002, he was the first person in the Marine Corps to be promoted after retirement with an honorary promotion to Gunnery Sergeant.

I rike you. Come ova to my house and fuck my shista.

I'LL BET YOU'RE THE KIND OF GUY WHO WOULD FUCK A PERSON IN THE ASS AND NOT EVEN HAVE THE GOD-DAMNED COMMON COURTESY TO GIVE HIM A REACH-AROUND!!