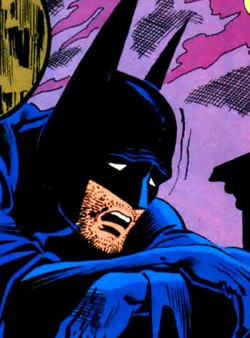 Maybe he's down about his parents being dead.

The Stoic is a varied character trope, coming in many shapes, sizes, and colors. They can be male or female, young or old, hero or villain, etc. They can be regular old Stoics or they can be one, maybe even more, of its many subtypes -- Emotionless Girl, The Spock, Badass Longcoat, to name a few. But one thing, no matter their gender, age, race, etc., is certain: they will never show emotion. Ever.

Well... except for that one time. Maybe two. Hell, even three!

Not So Stoic is what happens when a Stoic is pushed to the edge, and falls off. This is when The Stoic loses his/her façade and shows the world (or maybe just their True Companions) that they aren't an emotionless automaton. They may be good at hiding it, but they certainly feel just as much as the rest of us. Likely to be very heartwrenching or extremely terrifying. (Or possibly both)

In order to qualify, the show of emotion must be a significant one, not just a small smile or subtle frown. This emotion need not be a "negative" one: Manly Tears over the death of a teammate are certainly un-stoic, but so is unfettered joy over their improbable return.

These outpourings of emotion usually happen only a few times throughout the series—if the stoic is showing emotion every other episode in every season, then they aren't really much of a stoic. However, these moments can also be used to illustrate a character's growth away from prior stoic characterization, in which case displays of emotion—overt and subtle—would become more frequent over time.

The Kuudere is this trope embodied.

Compare with Not So Above It All, OOC Is Serious Business.

Examples of Not So Stoic include:

Retrieved from "https://allthetropes.org/w/index.php?title=Not_So_Stoic&oldid=1861473"
Categories:
Cookies help us deliver our services. By using our services, you agree to our use of cookies.