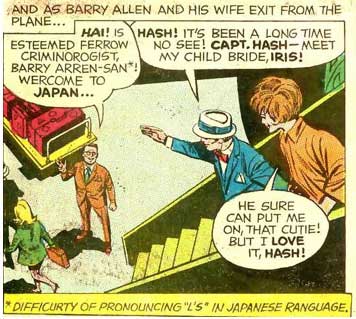 In a fit of cosmic ilony, the editol who inselted this footnote was kirred by a holde of loving ninjas the vely next day.

Whele a joke is made about plonouncing "R's" and "L's" incollectry in Japanese, or othel plonunciations.

When this trope is used, the letters are often reversed where the sounds they are making are not ones that would cause that problem—i.e. "R" (when pronounced "are") being replaced with "L", when a long "ah" sound would be more likely.

There is some truth to this: Japanese has neither English R nor English L - it has a sound that might be best described as a combination between an R and L,[1] if not for the incredible variation it sees in various dialects of Japanese. So, a native Japanese speaker who's not fluent in English can have difficulty telling when to use an R or an L, or will simply use their native R/L sound (which quite often sounds like the wrong letter to an English native). If you want to know what this is like, try pronouncing some Welsh or Gaelic words. The same is true of Korean - it has R's and L's, but these are different allophones of the same phoneme, which is pronounced as an L when it's at the end of a syllable (which doesn't happen in Japanese). Sometimes it's an honest mistake, rather than humor.

Also applied to other Asians - even if the accent doesn't fit (though Chinese are prone to r/l mistakes as well), or with exaggerated accents of their own.

The Japanese R can also occasionally sound to English-speakers like a D (specifically, the "tap" that replaces unstressed /t/ and /d/ in North American and Australian English), but not much seems to be made of this in media.

Involved in some cases of Spell My Name with an "S". Often used as part of Asian Speekee Engrish.

There is one more problem like this - "V" is replaced with "B".

Retrieved from "https://allthetropes.org/w/index.php?title=Japanese_Ranguage&oldid=1742233"
Categories:
Cookies help us deliver our services. By using our services, you agree to our use of cookies.