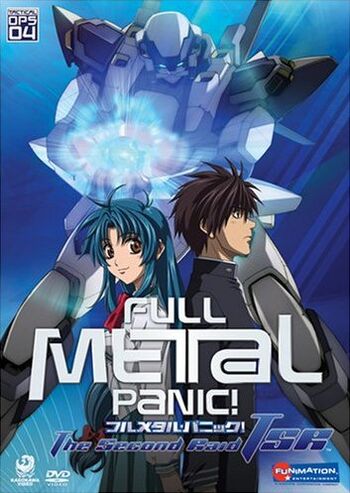 Unbeknownst even to herself, Kaname possesses special knowledge that numerous organizations would like dearly to control for their own means. As such, Sōsuke is assigned to infiltrate her high school in order to protect her while pretending to be an ordinary student, and without her knowing that she's in danger. Sōsuke, unfortunately, has no social experience outside his military life, having been literally raised as a soldier, and thus has no idea how to properly act in civilian life.

Hilarity Ensues but before long Kaname will be drawn into Sōsuke's world as well when the forces that want her for their own make their move to seize the girl, kicking off a globe-hopping plot as Sōsuke balances his bodyguard duties for Kaname with his duties as a member of Mithril's military forces.

Full Metal Panic! originally debuted as a series of Light Novels in Japan, books with interspersed illustrations. The series proved so popular that it was adapted first as a serialized manga in Newtype magazine, and later as an anime by Gonzo Animation. Two more series, Full Metal Panic? Fumoffu, and Full Metal Panic! The Second Raid were made by Kyoto Animation. While the original and Second Raid are both more serious action stories, Fumoffu is much Lighter and Softer, in that it focuses on Sōsuke's misadventures in school.

Despite the multiple formats, FMP! has actually managed to remain rather consistent between the novels themselves and the media that adapt them, with only minor changes. The twelfth novel (which is set to be the last full-length volume, though more short stories have not been ruled out) was released recently,[when?] while the anime itself has adapted the storyline of the first five. There was brief talk of a live-action movie adaptation in 2009, but that died down quickly and no more is expected to come of it.

However, there is now[when?] a new gaiden novel coming, set some years after the events of the last book, starring a bonafide cake eater, a new machine, and a thrice divorced Kurz. Spoilers ahoy.

Intelligent and with a definite look at putting realism into Humongous Mecha, FMP! nonetheless is also charming, funny, and at times, touching. Certainly worth a look by most anime fans.

Feel free to check out and contribute to the Character Sheet.

Sōsuke: Once you survive my training, then and only then will you become a weapon! Until that time you lowly maggots are nothing but a bunch of cocksuckers! I despise and look down upon you. Let's make one thing clear: my job is to find the limp dicks among you and weed them out! I won't have a stinking pussy on our team keeping us from victory! There will be no laughing or crying. You are NOT human beings! You are KILLING MACHINES! If you couldn't kill, your lives will become worthless! You fuckers would be better off in a corner jacking off your meat! You want to lose just to stand out? Pretend it hurts to gain some sympathy?! You are pathetic loser scum! The best part of you ran down on the crack of your mother's ass and ended up as a cumstain on the mattress! Quit draggin' your feet, you fuckers! If you whimper, I will unscrew your head and shit down on your neck! That ball is your only girlfriend! You don't need a Mary Jane with boobs and a large backside! Think of it as a wet pussy and fuck her as hard as you can!

Sousuke: It seems you think you're funnier than me.
Al: Affirmative.

Sousuke: (upon dropping all his weapons) I've complied to your demand.
Akutsu: Where the hell did you keep all that?!

Sousuke (yelling at the laptop as a "Game Over" appears): Wait a minute, if you cut off the negotiations from one side, it will become a war. Accept the negotiations! I'll listen to anything you have to say. We should compromise a little bit.
Sousuke (looks around): Where did Chidori and the others go?

Sousuke: It's just a coincidence.

This is the real Sōsuke. You might be in charge at school, but here, you're a liability. One wrong move, and you'll be a bloodstain. Now, let's go walk through hell.