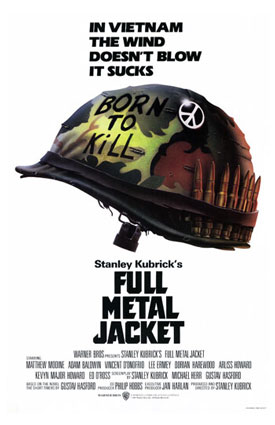 Full Metal Jacket is the story of the Vietnam War seen through the eyes of a US Marine known to the audience as "Joker". The movie, directed by Stanley Kubrick, is split into two parts. The first part follows Joker alongside his fellow Marine recruits through Boot Camp as they suffer under the colorful Gunnery Sergeant Hartman (played by R. Lee Ermey in his most famous role), and the second part follows Joker's struggle to keep his humanity while he covers the Vietnam War as a combat correspondent.

The film is based on the semi-autobiographical novel "The Short-Timers" by former Marine Gustav Hasford published in 1979. The novel is split into three sections (the film merges the second and third into a single part) and features more complex writing as the story progresses. The book was the first in a planned trilogy. A sequel came in 1990 called "The Phantom Blooper". The reason for the gap between publishing being that Hasford began writing for other publications as well as serving three months of a six month sentence for theft in 1988. Hasford died in 1993 of heart failure before the third book could be completed. The first two books are currently out of print but text copies are available on the author's site.

The title refers to the type of ammunition used by military rifles. A full metal jacket is a copper coating on the outside of a bullet that prevents it from deforming or breaking apart on impact (as well as keeping it from slowly filling the rifling with lead), as is required per the Hague Convention. According to the highest moral authority on the planet, it is acceptable to shoot people with these bullets (as opposed to bullets which are designed to deform or splinter when they hit their targets, which generally makes for a much nastier wound).

Tropes used in Full Metal Jacket include:
Retrieved from "https://allthetropes.org/w/index.php?title=Full_Metal_Jacket&oldid=1958550"
Categories:
Cookies help us deliver our services. By using our services, you agree to our use of cookies.