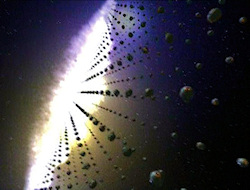 Space is, of course, an ocean. And sometimes your Space Navy needs to block access to a port, a space lane, or even an entire planet. How to do this? Why, Space Mines, of course. These are like their seagoing counterparts, but IN SPAAAAACE!!!

Just like there are several types of Sea Mines, so there are also many types of Space Mines. Most common are proximity mines, that go off when a ship gets too near, and contact mines that go off when they hit a ship's hull. Magnetic mines are attracted to metal hulls. Homing mines are essentially missiles that sit around until they detect a ship's engine or weapon energy signature, then angle themselves at the target and let fly. Some mines are miniature weapons platforms that open fire when ships get too close. Remote-detonated mines can be set off by a waiting vessel when a target ship gets in range. Nuclear mines have nuclear warheads in them. Then there are mines that rob ships of power (dampening fields) instead of just exploding. There are many other variations and combinations.

In real life, there would be some major limitations to this trope. However, since Space Mines seem to be an ubiquitous part of Space Operas, sometimes the savvy writer thinks of the above limitations and writes around them - and real-life applications have even been discussed in military circles.

Not to be confused with Space Mining operations, mining valuable materials from asteroids or other planets In Space.

Examples of Space Mines include:

So yeah, some degree of Truth in Television.