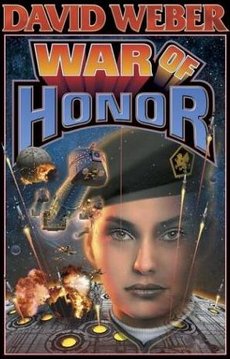 Honor Harrington is a Military Science Fiction series by David Weber. The book series is mainly set around the adventures of the titular heroine, although we see a fair amount of the wider universe. The primary conflict of the storyline is the Kingdom of Manticore (The Good Guys) vs. The (People's) Republic of Haven (The Bad Guys Who Aren't Entirely Unsympathetic).

Weber has explicitly described the series as "Horatio Hornblower" IN SPACE! with the series being a great deal more focused on (Space) Naval operations than other science fiction series. Honor Harrington occasionally performs ground-based and political adventures, but the vast majority of the series is focused on her ship-to-ship conflicts, where she serves as commanding officer.

Brief synopses of the books:

All the novels up to A Beautiful Friendship are legally available for free, along with many other Baen Books titles, via the Baen Free CD site. The best collection of Honorverse titles is on the Mission of Honor promotional CD.

David Weber announced on 27-Sept-2011 that a movie deal has been closed. However, Evergreen Studios, which was to make first the film and then the miniseries project that replaced it, went out of business in mid-2015, shelving for now the project.

Also, please help to make and expand the character page.

Warning: Spoilers ahead. As a Long Runner, Late Arrival Spoilers of the early books are unavoidable. Caution advised.

The following tropes are common to many or all entries in the Honor Harrington franchise.
For tropes specific to individual installments, visit their respective work pages.

Retrieved from "https://allthetropes.org/w/index.php?title=Honor_Harrington&oldid=1930213"
Categories:
Cookies help us deliver our services. By using our services, you agree to our use of cookies.