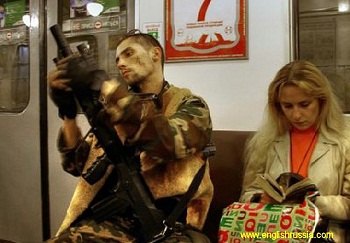 Just another day on the Moscow Metro.

An Unusually Uninteresting Sight is something that is blatantly unusual, yet nobody seems to take notice of it. It could be an odd costume, Unusual Ears, an external monologue, a visible weapon, or an animal that only vaguely resembles a normal one (such as a blue wolf wearing armor). For some reason, none of the bystanders take notice or comment on it. Or call the police.

When done well, this can help to establish a slightly different reality. When done badly, it can become plain creepy or ridiculous, depending on the show. In some cases this is justified with not being seen by mortals or for some reason if it's a kid's show/book/comic/other its often stated that the weirdness is unable to be seen by adults or doubters.

While unusual hair or eye colors won't get noticed, they don't really count, as they may not actually be there in the first place—see Hair Colors. When the Unusually Uninteresting Sight is ignored by apathetic folks in a metropolis, then that's City of Weirdos. Of course, the simplest explanation is that people may have simply gotten used to the sight and accept it as normal.

Possibly an extension of Somebody Else's Problem or No Big Deal, contrast with Mundane Made Awesome. Occasionally justified with a Weirdness Censor. Common in Magic Realism and Mundane Fantastic. See also Fantastically Indifferent, Elephant in the Living Room, Lions and Tigers and Humans, Oh My! and Not Distracted by the Sexy.

Examples of Unusually Uninteresting Sight include:

Retrieved from "https://allthetropes.org/w/index.php?title=Unusually_Uninteresting_Sight&oldid=1767898"
Categories:
Cookies help us deliver our services. By using our services, you agree to our use of cookies.