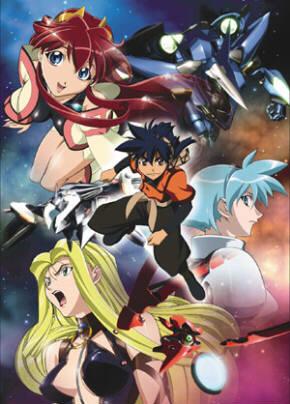 An examination of gender politics and cultural divisions played out as a Space Opera Mecha Show...no, really.

In the far-flung future, there are a pair of colony worlds: Tarak and Mejale, locked in a constant state of Space Cold War.

Tarak is the Orwellian, industrial, militarized planet of men. All food is synthetic, flavorless pills. All public gatherings are related to sports, marching, and being manly. Everyone wears a uniform. Babies are made by merging your genes with those of your buddies in a factory, and they are raised by dedicated orphanages/schools.

Mejale is the beautiful but impractical planet of women. All things are polished and shiny. All military uniforms are excessively flattering. Appearances are all important. The citizenry form couples, of the lesbian top/bottom variety, called the "Oma" and "Fama" in the native vernacular (probably derived from homme and femme), and make babies by merging two eggs and implanting them in the Fama. They eat real food and celebrate real holidays, like Christmas.

Naturally, the two worlds hate each other.

The story follows a young man named Hibiki Tokai, a factory worker from Tarak who wants more than anything to be a mecha pilot. When his attempt to steal a Humongous Mecha get him thrown into the brig of reconstructed battleship, things seem to be looking down...until the ship gets attacked by Space Pirates, and Hibiki, a Bishonen doctor, a cowardly officer and a malfunctioning robot wind up as prisoners on a ship full of women. Things couldn't possibly get any worse.

That's when the pirates find themselves stranded on the far end of the galaxy, with a mysterious alien force out to kill them. But, as a result of some serious Plot Technology, the pirate vessel merges with the men's starship, and one of the "Vanguard" mecha and three of the pirates' "Dread" fighters are altered. The Vanguard, piloted by Hibiki, can combine with any of the three Dreads into a form with amazing abilities.

All of the sudden, Hibiki's the focus of three girls with different personalities whom all want to try and "merge" with him. Of course, none of them have any concept of heterosexuality, and Hibiki doesn't even seem to know about any sexuality. They clumsily rediscover their biological imperatives as they fight a mysterious shadow enemy across the universe.

The three main girls, the pilots of the Dreads, are a variation on The Three Faces of Eve principle, with a military twist:

The characteristics of the merged Vandread mecha are unique metaphors for Hibiki's relationship with each girl:

Most of the crew fit dual roles for both a madcap, romantic-comedy and a military story. The Captain is also a wise grandmother, the medical technician's a naughty loli nurse, the local Wrench Wench is a Meganekko and a Gadgeteer Genius, while the communications officer is a friendly, pregnant Yamato Nadeshiko. The first officer's essentially the Harem Nanny, and the quartermaster's the wise Cool Big Sis.

Over time, the three men and the enormous gang of women come to an understanding, and they work together to unravel the bigger mysteries of the universe, like the origin of their robotic enemies and the fate of the other human colonies. A very funny and enjoyable dose of Martian Successor Nadesico meets Love Hina meets Star Trek: Voyager.

Tropes used in Vandread include:
Retrieved from "https://allthetropes.org/w/index.php?title=Vandread&oldid=1899247"
Categories:
Cookies help us deliver our services. By using our services, you agree to our use of cookies.