Everything About Fiction You Never Wanted to Know.
Jump to navigation Jump to search
/wiki/Stanley Kubrickcreator 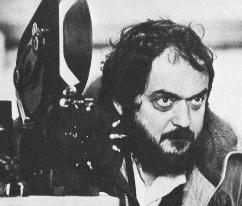 This man cares about his work. His eyes say so.

Stanley Kubrick is a controversial director. In a good way. His films span nearly every genre he could get his hands on—but start in the wrong place.

Originally a New York photographer, Mr. Kubrick wormed his way into film making with little difficulty. He made documentaries, which provided him the technical skill for turning stills into real movies. He never left England during his last forty years due to a fear of flying.

People he had worked with have described him as acidic to others but amazingly fond of animals and very close to his wife and children. But he treated pretty much all of the actors in his movies like crap. Some liked him anyway: Malcolm McDowell thoroughly enjoyed working with him on A Clockwork Orange, but was snubbed after shooting was complete. Equally abrasive individuals such as Jack Nicholson and R. Lee Ermey, however, remained friends with Kubrick until his death.

On average, however, his relationships could be defined by the making of Doctor Strangelove; Actors that did exactly as he said walked away with their paychecks (unless they were named Peter Sellers or R. Lee Ermey, who got to do a surprising amount of Improv). Slim Pickens was never told he was making a comedy, implying that his character was the hero of the film, heroically delivering the bomb that ends the world. Pickens was okay with it in the long run, spinning the publicity into a highly successful career. On the other hand, George C. Scott wanted to play General Turgidson as a dignified Well-Intentioned Extremist, so Kubrick tricked him by telling him to do a few over the top takes as "practice" and that they would never be put into the real movie. Kubrick used all of them. Scott swore he would never work with Kubrick again.

He also had a long-time friendship with Steven Spielberg, and the two would often have extended talks on the art of filmmaking and other subjects. Because of the England-Los Angeles time difference he would often call the latter up in the middle of the night, and the two would have conversations over the phone for hours. He dismissed Spielberg's Schindler's List for having a happy ending, but possibly he was miffed because he was planning to make his own film about the Holocaust and Spielberg beat him to it. After Kubrick's death Spielberg finished the last movie project that he had been working on as a token to him (although Kubrick had already pretty much given the reins of that project to Spielberg prior to his death), resulting in A.I.: Artificial Intelligence.

Because of his tendency for blazingly original iconography (his photography side really show), his films are ripe for Affectionate Parody. Because his films include some of the bleakest and harshest ever made, it is completely impossible to do a cruel one.

His work, due to the controversy it has provoked, has often been Vindicated by History. Many of his films including Paths of Glory, Doctor Strangelove, A Clockwork Orange and 2001: A Space Odyssey are viewed as among the greatest ever made.

Famous Films:
Stanley Kubrick provides examples of the following tropes:
Retrieved from "https://allthetropes.org/w/index.php?title=Stanley_Kubrick&oldid=1875245"
Categories:
Cookies help us deliver our services. By using our services, you agree to our use of cookies.