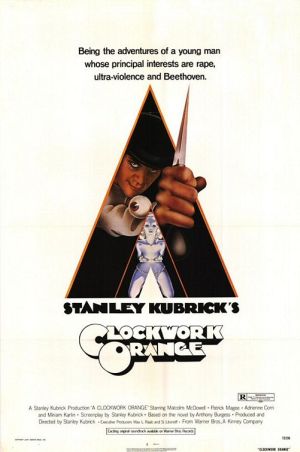 A Clockwork Orange is a 1971 film by Stanley Kubrick based on a 1962 novella by Anthony Burgess, about Alex, a teenage sociopath, and his group's crime spree, his capture and his attempted rehabilitation via psychological conditioning.

A massive hit in the US, but highly controversial at its release, it lead to its withdrawal from British distribution, at the director's request.

A Clockwork Orange was named to the National Film Registry in 2020.

Tropes used in A Clockwork Orange (film) include:
Retrieved from "https://allthetropes.org/w/index.php?title=A_Clockwork_Orange_(film)&oldid=1869733"
Categories:
Cookies help us deliver our services. By using our services, you agree to our use of cookies.