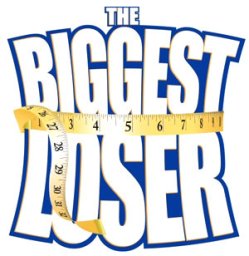 The Biggest Loser (original run 2004-2016) is a Reality TV show on NBC where a number of overweight individuals compete to lose the greatest amount of weight while living at a special ranch. The contestants are divided into two (or more) teams, each of which works out with a specific trainer, while facing temptations and reward challenges. At the end of each week, each contestant is weighed, and the participants vote out one of the two contestants who lost the least percentage of their body weight during the week. The final remaining contestant wins $250,000. A second prize of $100,000 is awarded to the contestant who loses the most weight after being eliminated as a motivation to continue to lose weight after elimination.

The show is was hosted by Alison Sweeney from Days of Our Lives (formerly, Caroline Rhea of Sabrina the Teenage Witch). Bob Harper has been a trainer since the first season, until the seventeenth where he took over from Sweeney as the show's host. Jillian Michaels was a trainer for 7 seasons, but left the show after season 11 finished. Two new trainers, Cara Castronova and Brett Hoebel, were introduced in season 11, but were not brought back for season 12. Pro tennis player Anna Kournikova and personal trainer Dolvett Quince were the new trainers for season 12, with Anna leaving at the end of the season, leaving Bob and Dolvett as the trainers for season 13. Jillian returned as a trainer for seasons 14 and 15, and then replaced by Jen Widerstrom for the final two seasons. Dolvett Quince remained a trainer for the show from Season 12 until the show went on hiatus in 2016.

As of February 2016, seventeen full seasons and two specials have aired in the United States, as well as 22 seasons in 11 other countries. In May 2019, the show was announced to be rebooted, and will premiere in the US some time in 2020.

Tropes used in The Biggest Loser include:
Retrieved from "https://allthetropes.org/w/index.php?title=The_Biggest_Loser&oldid=1762143"
Categories:
Cookies help us deliver our services. By using our services, you agree to our use of cookies.