She Cleans Up Nicely 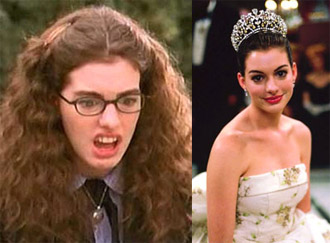 The USTful, Will They or Won't They?, Slap Slap Kiss couple is at a formal event—either as reluctant dates or as part of a group. Usually in some sort of ballroom or fancy dress setting. The girl (it's always the girl—almost) appears a little late, standing at the top of the stairs in an outfit which is probably an order of magnitude more attractive and stylish than her usual wear. The light catches her just right so she Sparkles. And, of course, suddenly she's got boobs. The guy, at the foot of the stairs, glances up and sees her and his jaw drops, eyes widen. The music rises. His heart flutters. He may gulp loudly. Can't make a coherent sentence for a minute or two. Sometimes the girl is self-conscious and shy of her new appearance, and sometimes she looks at the guy and goes "What? What are you looking at me for?" Occasionally she smirks instead, enjoying the effect she's having on the guy.

For non-native English speakers (or anyone who's confused), the trope name refers to the subject cleaning herself nicely—all prettied up for admiration.

Cue many a shipper going Squee. Plenty of Truth in Television here (except that it can easily be a boy in real life).

Every adaptation of "Cinderella" ever has this moment as the abused scullery maid arrives at the ball with her Fairy Godmother powered ballgown. Possibly the Trope Maker.

Wrench Wenches are likely to have at least one scene like this. Tomboys and The Ladette also often have a moment like this—often tagged with a "Hey, I guess you really are a girl." This happens to the Undercover Model for work-related reasons.

While the ballroom and the staircase are not strictly necessary for this trope to function, they are the most common elements in which to place the events unfolding.

Sister Trope to Beautiful All Along, Princess for a Day, Hollywood Homely and Bathe Her and Bring Her to Me. Occasionally involves a Pimped-Out Dress, but just as often a regular fancy dress will do. May be part of a Rags to Royalty situation. Sometimes overlaps with She's All Grown Up. Contrast Unkempt Beauty, where she doesn't need to be cleaned up to look nice. Be aware of the Unnecessary Makeover where this trope doesn't work for the audience.

Examples of She Cleans Up Nicely include:

Retrieved from "https://allthetropes.org/w/index.php?title=She_Cleans_Up_Nicely&oldid=1956078"
Categories:
Cookies help us deliver our services. By using our services, you agree to our use of cookies.