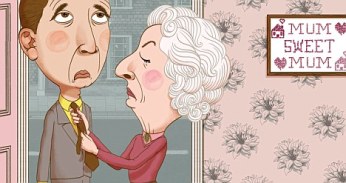 Mothers who are a bit too... controlling. Usually (but not always), they are the mothers of sons, and for whatever reasons can have a bit of trouble cutting the apron strings; as a result, no matter how old the boy (or, for added humor value, man) is, he'll be mothered relentlessly, his mother absolutely smothering him with parental affection... and authority. Using either carrot or stick, his mother will go to any lengths to make sure that, whether he wants to or not, he's not going to be leaving his mother's embrace any time soon. Any attempts on his part will usually result in a passive-aggressive guilt trip for trying to break away and do his own thing. Her poor son, as a result of such domination and badgering, usually ends up a Momma's Boy. For some reason, a lot of these mothers are Jewish. (Although they are also oftentimes Catholic, serving double-duty as a conduit for Catholic Guilt.)

Any Love Interest that her son may attract will be immediately regarded as a threat and a rival for the son's love by the Beloved Smother, and the woman will be belittled, harassed and spied-on to varying degrees of obsession. If her son happens to break free and marry the woman he loves, then that unfortunate woman will find herself coping with the Mother-In-Law From Hell, who will be hyper-critical, dismissive and condemning of everything she does to the point where it may even break the marriage apart if her son doesn't do something to curtail his mother's interference.

In the most favorable depiction, the Beloved Smother genuinely does love her son and wants him to be happy; she just has a little bit of trouble letting him go, and her plot arc usually revolves around the gradual realization that he's his own man and that she needs to cut the apron strings for his own good (and, usually, hers as well), and that his moving away from her doesn't equal that he doesn't love her in return. At worst, she's a Control Freak Evil Matriarch who will stop at nothing -- not even murder—to make sure that Mommy's Little Angel remains with her at all costs. For added Squick value, Mommy and Son may be a bit too close in the wrong kinds of ways...

It is rarer for daughters in fiction to have trouble with the Smother, but not unheard of; if the girl is unlucky enough to have a Smother, then things will be much the same (although rather than actively preventing their children from having a life outside of her, a Smother who has a daughter will usually instead start badgering her about why they aren't married and providing her with grandchildren on a constant basis). With daughters, however, the dominance may sometimes have an edge of competition as well, as they tend to view their own daughters as rivals. Smothers of daughters are often ex-Alpha Bitches or cheerleaders who tend to bully and harass their daughters into following their footsteps as a way of living their past glories through their children.

Like most tropes, it's a Truth in Television; Psychiatrist Carl Jung identified this archetype as the Terrible Mother, an over-nurturer who, in smothering her child, ends up stifling them to the point of hampering individuation and personal growth.

When a queen is acting as regent, she often will smother the young king as well, and expect to control the king after he comes of age.

If she actually succeeds in taking control of her children, those characters will end up with Mommy Issues.

May double up with Safety Worst. May overlap with Meddling Parents.

Compare/contrast Overprotective Dad and Fantasy-Forbidding Father. If it's a more action based series where the offspring being "smothered" is in trouble and the Smother is an Action Mom, see Mama Bear. If the mom was a child star and pushes her kid into stardom, she's a Stage Mom.

Examples of My Beloved Smother include:

and it only gets more over-the-top from there.

Retrieved from "https://allthetropes.org/w/index.php?title=My_Beloved_Smother&oldid=1695578"
Categories:
Cookies help us deliver our services. By using our services, you agree to our use of cookies.