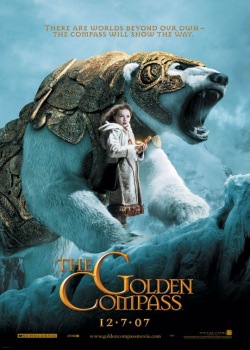 Lyra, an orphan running amok at Jordan College, gets drawn into her Uncle Asriel's stories of the North. Snatched up by Miss Coulter with promises of adventure, Lyra gets involved in an adventure that leads her to befriend Armored Polar Bear Warrior and a Hot Witch as she searches for her lost friend in the North.

The movie received quite a bit of attention before release due to the controversial themes approached in the book and the appearance as a children's movie. Protests were staged and news stories were made about both the movie and the book. However, the movie ended up doing less business than was anticipated and received lackluster reviews.[1] It still won an Academy Award for Visual Effects (Transformers and Pirates of the Caribbean fans were unhappy). The major themes of the book were altered, most likely due to Executive Meddling. The questions of how the sequels would handle the changes was answered easily -- "What sequels?"

Many 'His Dark Materials' fans like to pretend it never happened. Well, ignorance is bliss...

Tropes used in The Golden Compass include:
Retrieved from "https://allthetropes.org/w/index.php?title=The_Golden_Compass&oldid=1833438"
Categories:
Cookies help us deliver our services. By using our services, you agree to our use of cookies.