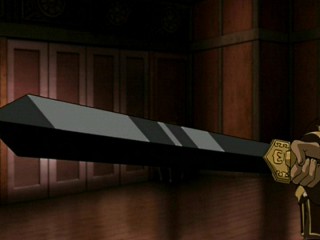 You can tell it's special because it's black when forged.

Meteoric metal carries inherent significance. Anything made out of it will be some combination of magical, good, evil, or just incredibly strong.

Crafting meteoric iron is Older Than Dirt: iron from meteorites has been used to make tools and weapons since the Ice Age, when it was the only iron available. The trope that it is special or magical isn't documented from that long ago, but some scholars believe that the Older Than Feudalism story of the forging of Zeus' thunderbolts refers to meteoric iron. Anyone with academic journal access can read more about this here.

This trope can also be Truth in Television. Real-life meteoric iron often contains traces of the rare, superdense metal iridium, which significantly strengthens the metal, and there's a reason why they're called iron-nickel meteorites now: they contain a lot of nickel, sometimes having a fine structure formed of interleaving alloys of nickel-iron and iron-nickel. And nickel strengthens a steel, so the old meteorite-hunt was justified. Before forging became advanced enough to make iron-alloys, this was one of only two ways to get them (the other being to dig them up and hope they're good enough), so this concept is linked with Cold Iron. Even when cold-wrought iron was outdated, at least it was a source of ready nickel.

But there was a trick: various alloys in meteorites have iron and nickel but aren't steel. Sometimes a lucky Inuit tribe (nickel alloys remain pliable at low temperatures while carbon steel becomes brittle and prone to breakage) got tons of metal they coldhammered into tools, but sometimes a smith faced an apparently very good, malleable, magnetic metal... which he could not temper like a normal iron, until someone said "screw that" and mixed it with a real steel, thus adding carbon—and reducing the level of nickel.

Even if these samples had no nickel in them, they contained very few impurities, which was very difficult to find or manufacture in any large amount prior to the industrial revolution (specifically the patent of the Bessemer process in 1855.) As an alloy, steels can only have around two percent of their total weight as carbon; beyond that, they're classified as cast iron and display increasingly brittle behavior. Starting with low carbon steel from meteorites makes it much easier to add carbon back in to just the right amount, making a metal that is hard enough to hold an edge but ductile enough to not shatter under strain.

In the modern day, this trope appears most frequently in literary fantasy. In many works, from The Silmarillion to Avatar: The Last Airbender, meteoric iron is (incorrectly) depicted as a naturally black metal, causing overlap with Black Swords Are Better.

See also Applied Phlebotinum, which is the science fiction/man-made equivalent, and Unobtanium, which it often is, and Magic Meteor. May be interchangeable with Cold Iron or a separate kind of Depleted Phlebotinum Shells.

Examples of Thunderbolt Iron include: