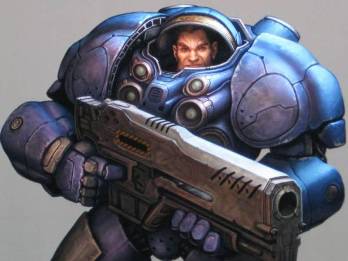 He is 3 meters tall, wearing a Powered Armor that weighs one whole ton...and he has a gun that can blow up your head. This is the reason he is called a Space Marine.

These guys are the number one troops of choice for the humans in the Standard Sci Fi Setting.

Space Marines first turn up in the Lensman Series in 1934. In 1959, Starship Troopers codified the trope, popularizing the emblematic Power Armour and the array of exotic weaponry they wield. Warhammer 40,000 is notable for taking these aspects to a peak, and also for owning a registered trademark on the name "Space Marine." This is because large-scale game Adeptus Titanicus had an expansion called Space Marine which was later taken as the title for the re-release of the entire game.

These elite soldiers have the cachet of conventional Marines. Add bulky power armor and (sometimes) genetic engineering to get classic Super Soldiers.

In many settings they fight as a squad, sometimes with Awesome Personnel Carrier support, or launched by Drop Pod. A notable exception to this are the many First Person Shooters that use the Space Marine background as a useful excuse to get a highly trained soldier alone on a hostile planet. This tradition starts with the much-imitated Doom series—see A Space Marine Is You and One-Man Army.

This page shouldn't be to be confused with the video game Warhammer 40,000: Space Marine, though that game pretty much is about them.

It should be noted that the name "space marine" is actually a misnomer—there's no water in deep space. Works aiming for more realism or a more Atom Punk feel may prefer to call them "espatiers." But for those wanting more to invoke the Romantic Space Is an Ocean trope the name space marine works just fine.

Note: This trope is about the elite spaceborne soldiers themselves. Overly-generic Science Fiction military protagonists belong elsewhere, such as A Space Marine Is You for video games.

Examples of Space Marine include:

Retrieved from "https://allthetropes.org/w/index.php?title=Space_Marine&oldid=1808723"
Categories:
Cookies help us deliver our services. By using our services, you agree to our use of cookies.