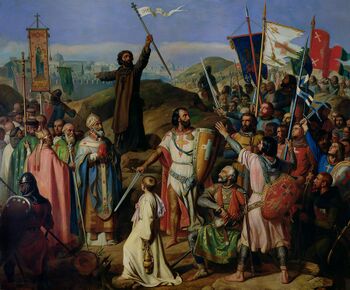 The Crusades were a series of military campaigns that took place between the 11th and 13th centuries against the Muslims, or Saracens, to reconquer the Holy Land (other conflicts, such as the campaigns against the Moors in Spain, the Baltic pagans, or even the Albigensian heretics, were occasionally styled "crusades", but in the popular mind, it is the Palestinian campaigns that dominate). The immediate cause was the petition from the Byzantine Roman Emperor Alexios I to Pope Urban II for help against the Muslim conquests in the Byzantine Empire[1] , but the movement from then on extended to a much bigger and more complex set of conflicts. Although religious fervour was certainly a big factor, the motives, progress, and effects of the various Crusades are deeper and more various than most people think, so perhaps you are better off reading The Other Wiki (among other places) if you want to know more. Nevertheless, here is an overview of the more important crusades―the first through the fifth, which had the approval and blessing of the then reigning Popes, to get you started.

Retrieved from "https://allthetropes.org/w/index.php?title=The_Crusades&oldid=1956724"
Categories:
Cookies help us deliver our services. By using our services, you agree to our use of cookies.