Indiana Jones and the Last Crusade 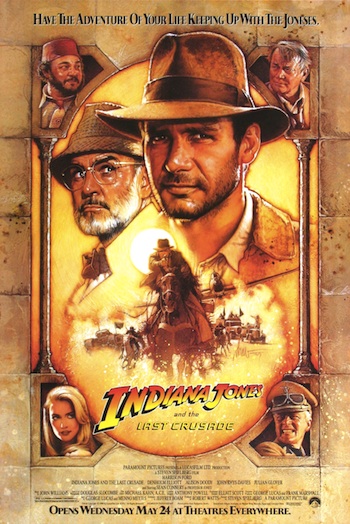 "Have the adventure of your life keeping up with the Joneses."

The third film in the Indiana Jones series.

Indiana had a troubled history with his father, Henry Jones, who was also an archaeologist. But one day, his father disappears when a major breakthrough is made in Henry's life's work, the search for The Holy Grail. Now Indy has to find his father and the Grail, while keeping Nazi Germany from once again getting their hands on an artifact that could make them all-powerful.

During the filming of the young Indy scenes, George Lucas saw the potential of a prequel series. He would soon develop and produce Young Indiana Jones.

As for the movie series, though the original intent was five films, Spielberg and Lucas would decide to just end the series here - feeling it was best to go out on a high note and cap off a trilogy. Obviously, that didn't take and after a lengthy Development Hell, Indiana Jones and the Kingdom of the Crystal Skull was released nineteen years later.

Tropes used in Indiana Jones and the Last Crusade include:
Retrieved from "https://allthetropes.org/w/index.php?title=Indiana_Jones_and_the_Last_Crusade&oldid=1845642"
Categories:
Cookies help us deliver our services. By using our services, you agree to our use of cookies.