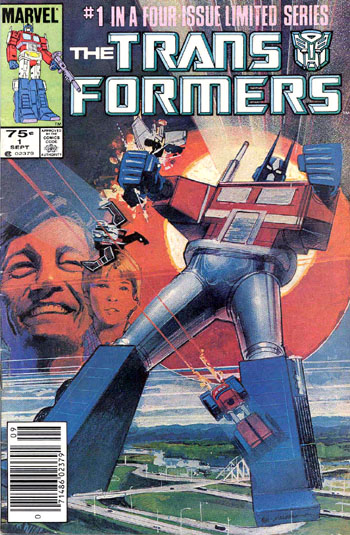 Four million years ago, they came from Cybertron, a world composed entirely of machinery... a world torn by an age-old war between the heroic Autobots and the evil Decepticons. These incredibly powerful living robots, capable of converting themselves into land and air vehicles, weapons and other mechanical forms, continue their conflict here on Earth. They are...THE TRANSFORMERS
—Introductory blurb of the US comic

The comic was initially set in the main Marvel Universe, but soon moved to a separate Alternate Universe along with the G.I. Joe comic to prevent Executive Meddling from Hasbro interfering with Marvel's own characters. Most of the early issues were written by Bob Budiansky; he and his successor, Simon Furman, would end up having more influence on the overall Transformers mythos than anyone else.

In America, the comic was originally a four-issue limited series written by Jim Salicrup and published bi-monthly. When it became an ongoing series, it was printed monthly and written by Budiansky. It was printed on higher-quality paper than most other comics, and as a result was also more expensive. While it used the same characters, setting, and premise as the cartoon, it told a significantly different set of stories. In particular, while the Transformers in the cartoon were built by Quintessons, in the comic, they originally arose from "naturally-evolving gears and pulleys." This was later Ret Conned into the Transformers being created by the god Primus, a part of canon later cartoon series adopted.

In the UK, the comic was published weekly for most of its run, and the American comics were commonly split in two in order to stretch the material. To make up for the dramatically shortened length, the UK comic also featured original material written by Simon Furman in the gaps between the American issues. These stories usually fit in with the American continuity, albeit with occasional twisting. After the movie, Furman started using the future cast in his stories, both the make Hasbro happy and the avoid stepping on Budiansky's toes. Each issue also featured a backup story to increase the page count; these ranged from the sensible (Iron Man, Action Force) to the silly (Planet Terry). Later on, after the comic went fortnightly, they were replaced by new Transformers material written by Furman; these were in colour at first, though later shifted to black and white as a cost-saving measure.

In addition, 1987 brought the new Headmaster and Targetmaster toys. Since this resulted in the appearance of a large number of toys with two gimmicks between them, Budiansky wrote a four-issue Spin-Off entitled Transformers: Headmasters (not to be confused with the Transformers Headmasters Anime), which introduced all the new characters as arrivals on the planet Nebulos. This series ended with the characters leaving Nebulos for Earth, to arrive in US issue 38 (UK 156). In the UK, it was reprinted in 16 parts as the backup strip in the main comic during the leadup.

After Budiansky suffered Creator Breakdown as a result of trying to keep Hasbro happy, Furman was brought on to write both the US and UK comics. His focus on story arcs and Character Development was considered the high point of the comic's run; however, due to a communications breakdown, the UK comics at this point drifted out of sync with the US publication. Furman initially tried to tie his backup stories more closely to the main action, but Marvel UK frequently reprinted a classic story without warning, which resulted in the backup strip referencing events that had yet to occur in the main strip. As a result, Furman said "screw this" and simply turned the backup strip into a series of light-hearted romps that never even tried to maintain continuity with the US series.

It finally ended after 80 issues in America (September, 1984-July, 1991) or 332 in Britain (September, 1984-January, 1992) due to declining interest in Transformers, though Marvel would later publish the short-lived Generation 2 comic as a sequel. Transformers Classics is an alternate sequel by Fun Publications, set in an Alternate Timeline ignoring the events of Generation 2.

Tropes used in The Transformers (Marvel Comics) include:
Retrieved from "https://allthetropes.org/w/index.php?title=The_Transformers_(Marvel_Comics)&oldid=1727725"
Categories: