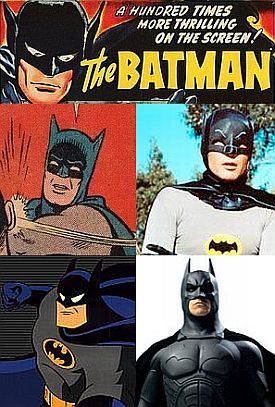 And they each have their own continuity as well.

Continuity is a confusing thing. Sometimes when adapting a work, writers will scrap previous continuity and write a new continuity either disregarding the old one, or painting continuity in Broad Strokes. The result is an Alternate Continuity—a story that is no less "official" than the original, but which cannot be reconciled with it with regards to Backstory or Canon. It effectively lives in a different universe. Sometimes this forms the basis of a Media Franchise.

Anime in particular has several diverse distribution paths in Japan, depending on its format—motion pictures in theaters, OVAs in direct-to-consumer sales, and 26+ episode-long series on television. It is not uncommon for an Anime to transfer from one distribution path/format to another. This is most frequently seen in shows that enjoy great success as OVAs; they jump to broadcast, and what was once effectively a miniseries becomes a story it takes an entire season to tell. Alternately, a successful series can become a movie.

When such a move is made, it's common for the story to simply be retold in the new medium, often with radical changes in both plot and characterization, creating an Alternate Continuity.

Oftentimes, an Alternate Continuity is unintentionally started when a show based on an unfinished series of a different medium runs out of material. See Overtook the Manga for this Trope in detail.

Be warned, though: sometimes an Alternate Continuity is the occasion for Adaptation Decay. See also Elseworld and Canon Discontinuity.

Note that this Trope is specifically about changes in continuity moving from medium to medium, or after a Continuity Reboot. See also The Movie, Ultimate Universe (a Sub-Trope of this), Canon Immigrant and Media Franchise. When Fanfic attempts to weld two or more of these into a single story, it's called a Patchwork Fic.

Examples of Alternate Continuity include:

Retrieved from "https://allthetropes.org/w/index.php?title=Alternate_Continuity&oldid=1915826"
Categories:
Cookies help us deliver our services. By using our services, you agree to our use of cookies.