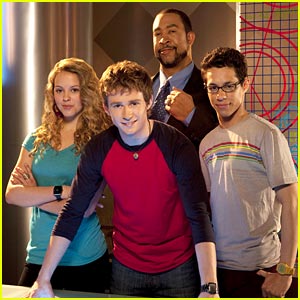 Remember the days of Nickelodeon that featured ordinary kids getting thrust into wild and wacky supernatural situations with a healthy dose of comedy and danger? No? Well, apparently Nick decided that the brats of today needed a refresher course, hence the sci-fi/comedy show The Troop's birth.

The show focuses on three high schoolers that suddenly are thrust into a secret society, courtesy of their school counselor, that protects humankind from all the supernatural scourges in existence that we think aren't real, but most assuredly are. The main characters consist of:

Tropes used in The Troop include:
Retrieved from "https://allthetropes.org/w/index.php?title=The_Troop&oldid=1832537"
Categories:
Cookies help us deliver our services. By using our services, you agree to our use of cookies.