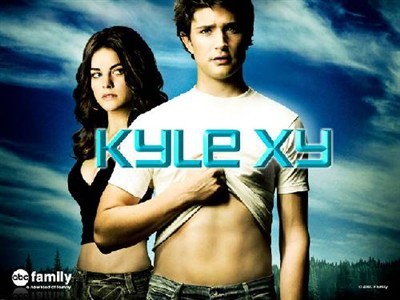 Series broadcast by ABC Family from 2006 to 2009. Kyle XY is a modern-day sci-fi show built around the title character of Kyle. In the first episode, Kyle is a mute, naked, wide-eyed teenager with no memory and no belly button found wandering out of the woods and into the Puget Sound area of Washington state. After a short stay at a juvenile delinquent center, social worker and psychiatrist Nicole Trager sees a benign personality in Kyle that doesn't belong there, so she obtains permission to provide a type of foster care with her own family.

Her family is hesitant at having a stranger around, but Kyle shows a certain affection for them and his simple honesty despite not saying a word wins them over. At the end of the first episode, Kyle says his first words to his surrogate family and their story begins, but not without him having strange traits like preferring to sleep in the bathtub.

The rest of his new family consists of patriarch Stephen Trager, a brother in Josh Trager who is convinced Kyle is an alien, and Lori as a big sister who shows him the nuances of teenage life. Kyle quickly gains a crush in the literal Girl Next Door Amanda and a best friend in Declan, who has an on/off relationship with Lori. Also included is a shadowy stalker Tom Foss who knows where Kyle is from.

Over time, Kyle gathers an array of impressive abilities that no human should have. It appears that all of these abilities are a result of using far more of his mind then anyone else. He learns entire languages and memorizes the encyclopedia in minutes. He is capable of instantaneously solving graduate level calculus. He jumped off a roof without any harm and recreated a jpeg image after briefly seeing the base computer code.

While it doesn't take too long for the mystery to be solved, there are other problems surrounding it, not the least being that there is someone else exactly like him.

Part of the success of the show came from its impressive advertising campaign, including viral marketing and several obvious sponsors. Critical reception was very warm, with a lot of praise going out to actor Matt Dallas for a tone-perfect performance as the title character.

The series concluded with its third season, leaving a myriad of questions unanswered, in true Kyle XY style. Word of God did, however, say a few things about where the story would have gone had it continued for a couple more seasons.

Tropes used in Kyle XY include:
Retrieved from "https://allthetropes.org/w/index.php?title=Kyle_XY&oldid=1626104"
Categories: