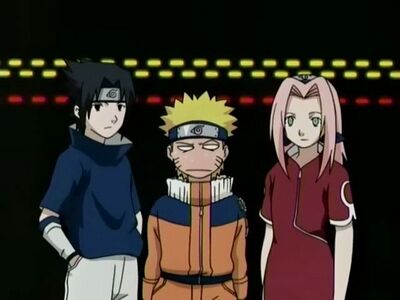 "Friends" is ...generous. It gets a bit more.... complicated when the plot gets underway.

They grew up together, they've always been best friends, they're going to be happy forever, right?

Suuuure. Then the plot happens.

Inevitably, the main character, often The Messiah, gets pitted against the other guy, who is the Rival Turned Evil. Usually Because Destiny Says So. The girl, who usually owns the Amulet Of Extreme Plot Significance, gets kidnapped a lot or maybe the two guys fight over her, usually via their own clashing ideas on how to protect her, or just romantically, (especially if they're hitting puberty). The Hero, The Lancer, and The Chick with the other stuff pruned off.

Whether romance is in the equation varies; sometimes the girl is the sister of one of the guys, though usually not by blood. Expect a lot of Boys Love Fanfic based on tenuous Ho Yay/Foe Yay between the two males, most of which applies Die for Our Ship to the girl.

Highly prone to feature a Cock Fight, especially if the girl is not related to either of the boys. Also prone to the With a Friend and a Stranger dynamic.

The setup of Two Girls and a Guy isn't unheard of, but is less common, probably due to a tendency to make the Main Character of a story male.

If a Five-Man Band gets formed see Three Plus Two. It'll often be a spare Love Interest and a fifth wheel, especially if there's emphasis on the romance.

Oh... if you're looking for the show originally called Two Guys, a Girl And A Pizza Place, then uh... click that link.

Examples of Two Guys and a Girl include:

Retrieved from "https://allthetropes.org/w/index.php?title=Two_Guys_and_a_Girl&oldid=1963402"
Categories:
Cookies help us deliver our services. By using our services, you agree to our use of cookies.