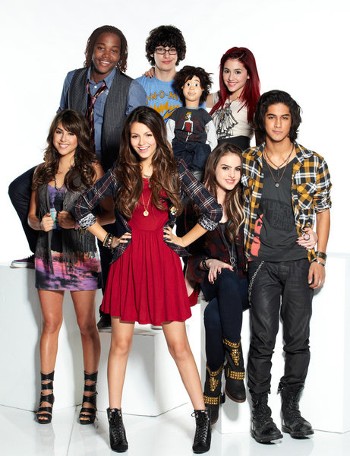 Victorious is the latest[when?] creation of Dan Schneider, airing on Nickelodeon. The star of the show is Tori Vega (Victoria Dawn Justice), who gets into Hollywood Arts (a school for the arts in Hollywood) after filling in for her less talented sister Trina (Daniella Monet) during a big showcase. Backing her up throughout the experience is André Harris (Leon Thomas III), a musically gifted boy who almost immediately warms up to her. On the flip-side, there's Jade West (Elizabeth Gillies), a dark-natured girl acting as Tori's rival. Completing the cast are Caterina "Cat" Valentine (Ariana Grande), a hypersensitive girl on her own level of reality; Robbie Shapiro (Matt Bennett), an awkward and shy guy who is rarely seen without his puppet Rex Powers; and Beck Oliver (Avan Jogia), Jade's much more mellow significant other.

As should be no surprise, Hollywood Arts is... untraditional. Students are required to customize their lockers, live music in the hallways is more rule than exception, and nobody bats an eyelash at the eccentricities of their fellow schoolmates. Some of the show's plots are derived from the school, usually dealing with performances or assignments. Other plots come from character interaction outside school walls, providing plenty of fuel for the already emerging shippers. It must be noted that, for a Nickelodeon show, the show can venture quite far into innuendo – though considering Schneider's other current show, this is to be expected.

Now with its own Getting Crap Past The Radar section, Character Sheet, a Headscratchers page and appropriately for a show about a performing arts high school, an Awesome Music and a HoYay/LesYay page

Due to several crossovers, especially a major crossover with iCarly, it is now part of the Nick Verse.

Tropes used in Victorious include:

Adding to the weirdness, Trina in the pilot was at least somewhat aware that she couldn't sing, to the point where she took the Chinese Herb Gargle in the hopes of improving her voice. Rule of Funny, naturally, causes that to be thrown out the window in future episodes, resulting in Trina being completely and utterly oblivious to how bad her singing is.

Retrieved from "https://allthetropes.org/w/index.php?title=Victorious&oldid=1784353"
Categories:
Cookies help us deliver our services. By using our services, you agree to our use of cookies.