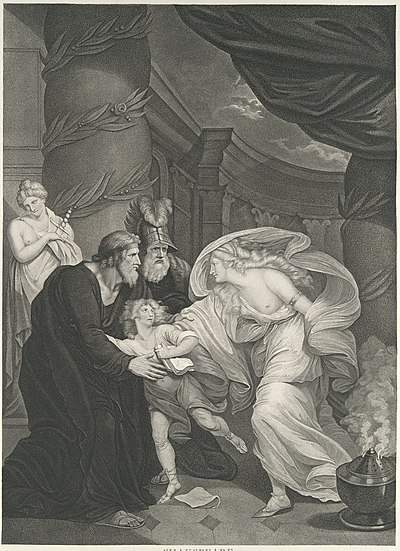 William Shakespeare's first and most gruesome, gory, bloody, et cetera, tragedy. As S. Clarke Hulse's says, Titus Andronicus is a play with "14 killings, 9 of them on stage, 6 severed members, 1 rape (or 2 or 3, depending on how you count), 1 live burial, 1 case of insanity and 1 of cannibalism--an average of 5.2 atrocities per act, or one for every 97 lines."

Here's a very basic outline: Titus comes back to Rome with his captives—Tamora, queen of the Goths, her three sons and her lover Aaron the Moor—in tow. He has lost all but four of his twenty-five sons in the war with the Goths. To honour his dead sons' spirits, Titus sacrifices Tamora's eldest son. Tamora, needless to say, ain't happy.

The emperor of Rome, Saturninus, chooses Tamora as his empress, after his brother, Bassianus, runs off with his intended bride Lavinia—-who, by a staggering coincidence, is Titus' daughter. (Her surviving brothers help her escape and now it's twenty-two sons down, three to go. Does it count if Titus kills them himself?)

Why aren't they teaching more Shakespeare in schools?

The play was made into a movie by Julie Taymor in 1999. It's even crazier.

In troping terms, Titus Andronicus tried to be Cincinnatus only for it to backfire spectacularly.

Tropes used in Titus Andronicus (theatre) include:
Retrieved from "https://allthetropes.org/w/index.php?title=Titus_Andronicus_(theatre)&oldid=1929478"
Categories:
Cookies help us deliver our services. By using our services, you agree to our use of cookies.