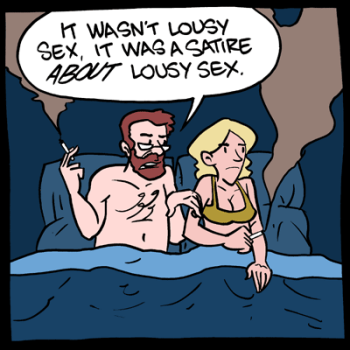 Why, you boldly declare that it was a parody all along, of course! Yeah, your insipid plot was actually a snarky send-up of the genre, your actors were performing with Dull Surprise on purpose, and your SFX department fully intended for the costumes to look that cheap. It's just too bad the audience and critics apparently missed the joke, haha! Ha?

Simply put, any work which, once consumer reaction came back negative, had its failings handwaved by claims that it was supposed to be a parody. A relative of I Meant to Do That and "Just Joking" Justification. See also Poe's Law and Author's Saving Throw. Not to be confused with an External Retcon which is a Deconstruction of a previous work. Compare Indecisive Parody. Contrast Springtime for Hitler. Finally, be warned that any legitimate parody that's too subtle can and will be accused of this unless you have some kind of solid evidence to back it up.

Examples of Parody Retcon include: