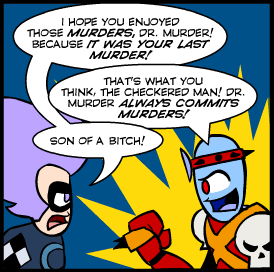 A scene from Checkerboard Nightmare's concept for a new comicbook.

Appealing to my better nature? I'm a villain! Here is My Card! "Eve L. Duehr: Academy of Evil graduate, aspiring tyrant, kicker of kittens, and spontaneous singer of Barney songs." I crossed the Moral Event Horizon while still in grade school and have never once looked back. And you think you can talk me out of my evil deeds? Ahahahahahahahahaa!

Villains like this may be greedy, violent, Badass, etc. but most importantly, they are Evil. It's in the job description. They refer to themselves as Evil, with a capital "E". Stretch it out to "Eeeeeevil" for emphasis. (They may even pronounce the "I" with emphasized shortness. Ee-vill. Like the froo-it of the dev-ill.) Terminal cases even require their minions to call them "Your Evilness". In fact, calling them evil, vile, ruthless, or any generally negative epithet will be an Insult Backfire and be taken as the kindest of compliments.

The Card Carrying Villain demands to be respected and feared and on top of the heap over everyone else because Evil Is Cool and Good Is Dumb.

Thus, they are expected to Kick the Dog and never Pet the Dog. If they acted differently, they'd lose their Evil ranking. Especially ironic if the reason they fell was because they wanted freedom from constraints on their actions. Whatever action they as a good guy wanted to do is considered "bad", so they have to do other bad things as well now. After a while, they usually forget about whatever goal it was that turned them Evil in the first place. So...in a very odd way, they're very much The Fettered; since their actions are bound by the expectation of Evil.

There are, in general, three spheres of Card Carrying Villainy:

A Black Cloak, a low-ranking Terrible Trio, an Ineffectual Sympathetic Villain, or someone who's succumbed to The Dark Side is usually most likely to identify themselves this way.

A subversion is for these folks to not actually be cruel, greedy, or unnecessarily violent, but just doing their jobs. A Noble Demon is a Card-Carrying Villain who talks the talk, but has a tendency to hold back or even help from time to time.

If not done right (and it is very, very easily done wrong), that is to say, if the card is too serious or obvious, the result can be cheesy, annoying, and Anvilicious. (Of all the evil people in Real Life, how many have ever self-identified as evil? Hitler, Stalin, and Mao—all of them believed with messianic zeal that they were doing good.) Though, in comedy situations/shows, this fate is usually averted, as it's a humorous thing (and thus right in place). It can also be used with a darker twist - showing a person so beyond redemption, so beyond what we call usual morality, that he is literally impossible to argue and reason with.

In the final stage, you have a villain who insists on justifying their actions because "it's what villains are supposed to do"; see Contractual Genre Blindness.

Contrast with Knight Templar, a villain who completely believes that they are good. They can become a Card Carrying Villain if they have a Heel Realization and decide to keep being a villain anyway. Also contrast Moral Myopia, where the villain doesn't consider the evil he's doing to others to be wrong. taken too far, the villain might become a Complete Monster, especially when he/she has no moral restraints.

Card-carrying villains are particularly likely to do something For the Evulz.

Expect them to have relations with the dark and/or have evil powers.

Why "card-carrying"? See the Trivia page.

Examples of Card-Carrying Villain include:

Retrieved from "https://allthetropes.org/w/index.php?title=Card-Carrying_Villain&oldid=1921072"
Categories:
Cookies help us deliver our services. By using our services, you agree to our use of cookies.