Everything About Fiction You Never Wanted to Know.
Jump to navigation Jump to search
/wiki/Tom Lehrercreator 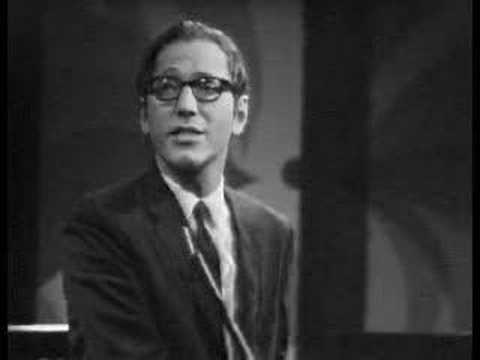 Tom Lehrer is an American satirist who managed to achieve remarkable popularity and impact on popular culture, despite having produced only three albums' worth of material in the 1950's and 60's before retiring to a life in academia as a mathematician. Lehrer's pieces often take the form of witty parodies of various popular song-forms. Other common themes in his work are disapproval of nuclear war, Cold War politics, and folk singing. Of course, he undercuts that last by putting forth as perfect a rendition of such songs as can be done with only a piano ("imagine that I am playing an 88-string guitar") as accompaniment.

"Weird Al" Yankovic cites Tom Lehrer as one of his inspirations. Lehrer's own inspirations notably include Gilbert and Sullivan and Cole Porter. Allegedly, he invented the Jell-O shot.

Quotes from Mr. Lehrer's works are used at the top of the following pages:

And for the picture captions of the following pages:

(Note: These lists may not be complete. As you can see, he's quite popular on this wiki).

Tom Lehrer is the Trope Namer for:
Tom Lehrer provides examples of the following tropes:
Retrieved from "https://allthetropes.org/w/index.php?title=Tom_Lehrer&oldid=1779067"
Categories:
Cookies help us deliver our services. By using our services, you agree to our use of cookies.