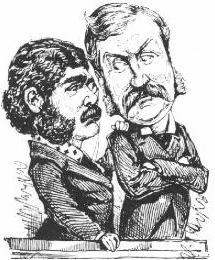 Sir William Schwenck Gilbert and Sir Arthur Seymour Sullivan were a Victorian duo who together wrote a number of hugely popular and influential comic operas, which served as forerunners of The Musical (most people today think of them as musicals), Gilbert writing the book and lyrics (what's known as a librettist, because he writes the libretto), and Sullivan the scores. Their most famous works are the so-called Savoy operas (from the Savoy Theatre where their operas were produced by entrepreneur Richard D'Oyly Carte), stretching from Trial By Jury in 1871 to The Gondoliers in 1889. The partnership then broke up, partly because of the legendary irascibility of Gilbert, partly because Sullivan (encouraged by none other than Queen Victoria (!)), wished to devote himself to serious music, mostly over a carpet. Two later works, Utopia, Ltd. and The Grand Duke, came after the reunion of the team; they have not generally been considered successes.

The Savoy operas are characterised by the topsy-turvy logic of their plots, which often achieve their dénouement on the basis of some paradoxical ("Gilbertian") legalistic quibble (Gilbert had trained as a lawyer), as well as by their satire of English institutions. Gilbert's lyrics are masterpieces of complicated and difficult rhymes, often employing obscure and topical allusions, as well as three or four foreign languages; Sullivan's serious and romantic music adds emotional depth and tenderness to their often cynical frivolity.

The operas tend to include a number of characters intended to show of what might be called the Savoy's "stock company": a light baritone playing a (generally not very pleasant) character who wishes (usually without success) to marry the heroine and who will almost certainly at some point sing a Patter Song; a soprano heroine, sometimes sympathetic, but often selfish and scheming; a pompous bass-baritone; and a contralto (with, as the great Anna Russell described her, "a voice like a foghorn"), whose attempts to marry a man who desperately does not want to marry her form the basis of quite a few of Gilbert's jokes. However, these roles are also regularly subverted: For example, in half the operas,[1] the contralto's love interest is in love with her from the start, and in Ruddigore, she has two men after her.

Though both of the pair were eventually knighted, Queen Victoria refused the honour to Gilbert (possibly having been offended by one of his works, but more likely simply because she thought knighthood more suitable for Serious Business like Sullivan's (now mostly forgotten) serious works such as Ivanhoe). This was likely a contributory cause to their quarrel. The honours would eventually be evened by King Edward VII. Their royal patronage was not restricted to Britain, either; reportedly Kaiser Wilhelm II knew The Mikado off by heart, and on the one occasion Sullivan met him, he regarded him as a Loony Fan.

If you want see how the team was in action, see the film, Topsy Turvy, which depicts how they almost broke up until they are inspired to create The Mikado.

There are also three parlour ballads:

Arguably, The Martyr of Antioch (1880, sacred cantata), Sullivan's setting of a poem by Millman, could also be included in this list, as Gilbert abridged and rearranged it, wrote some new material (including a couple of songs) to replace what was cut and simplify over-long scenes, and generally worked to make the libretto to count as a good example of Adaptation Distillation.

Only a few of their solo works are regularly read or performed; the most often performed (or read) of these are:

Gilbert also wrote about a hundred or two hundred other works, mainly plays and short stories, not counting ephemera for magazines (e.g. brief satire of current events, a lengthy Troperiffic series of parodies of bad plays, and so on).

Gilbert and Sullivan provides examples of the following tropes:
Retrieved from "https://allthetropes.org/w/index.php?title=Gilbert_and_Sullivan&oldid=1893570"
Categories:
Cookies help us deliver our services. By using our services, you agree to our use of cookies.