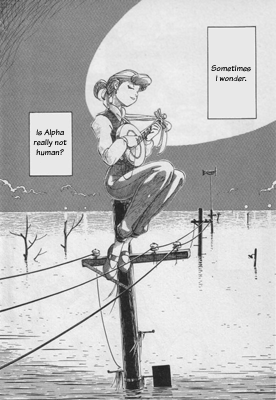 One by one, the notes of the moon-guitar fell.

Robot Girl Alpha Hatsuseno runs a cafe outside Yokohama, nearly deserted after a catastrophic flood, implied to have been part of a longer chain of disasters. Soon, another robot comes with a delivery of a camera, beginning... well, not much, really. Don't let her gun fool you; it's a pretty laid-back series.

Written by Hitoshi Ashinano, Yokohama Kaidashi Kikou (Record of a Yokohama Shopping Trip) is a slow, quiet vision of the peaceful decline of humanity. Perhaps very little happens, but then it's not about things happening. YKK is a manga series that gives you something to think about, and time in which to do it. After all, there's all the time in the world.

A bit of advice: If you try to speed read through the manga, you'll probably find it very boring and pointless. The story is told through the visuals, not the words. This also means that the untranslated work is still enjoyable for non-Japanese speakers, which is a boon since it hasn't been officially released in the West (though an unofficial Scanlation is floating around on the Internet). Sit back and stare at the artwork.