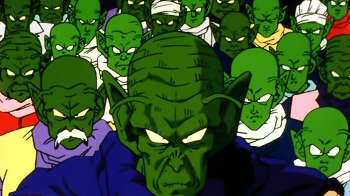 Not a tribe, but an entire race or group of humanoids inexplicably made up of one sex. Male is usually the default, but females under the Cute Monster Girl rules are becoming more common and more obvious. The lack of the other sex is handwaved briefly; Disaster wiping out the other half, or voluntary separation are two common reasons, although sometimes it seems they just don't appear.

If the genetic stock is replenished by mingling with other 'races', you often get the strange explanation that Gender Equals Breed, rather than the offspring being actual hybrids; alternately you can get Bizarre Sexual Dimorphism where two One-Gender Races are revealed to be the male and female versions of the same species.

This is really more about creating a unique culture without having to create an enormous amount of back story. For obvious reasons this used to be an easy device to soapbox gender issues, with all the associated political and social biases in place. Sufficiently old mythological legends may be grandfathered in even in a series avoiding One Gender Races, because the alternative gender is rarely depicted or has no instantly recognizable version.

Tends to be on the High Fantasy of fantastical scale for reasons obvious to anyone with any concept of biology. Assuming sex is genetically determined in the usual way, sex ratios in animals tend to even out over time, even though sexual selection would suggest only a handful of males (traditionally the "unlimited", low-investment sex, at least among mammals—birds, for example, are often a totally different story) are actually needed or prefered for a population. Within a population or an explicitly social group, however, sex may or may not play much of a role . For example, the slightly outdated concept of mammals who have "harems" has been commonly reinterpreted as females tolerating a single male simply due to access to resources his leadership provides, while having more than one is simply bothersome to the group after a certain age. However this doesn't mean 'fewer' males contribute to the species; many are simply forced into being loners, bachelor groups, or "sneakies" who, while 'suboptimal', take what they can get.

In the right (or wrong) subculture, expect Fanon concerning hermaphroditism and various methods of Homosexual Reproduction, especially if the race is all-female.

Examples of One-Gender Race include:

Retrieved from "https://allthetropes.org/w/index.php?title=One-Gender_Race&oldid=1948949"
Categories:
Cookies help us deliver our services. By using our services, you agree to our use of cookies.