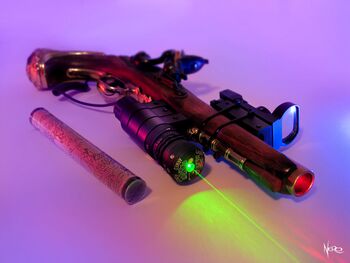 The setting may seem at first to be The Middle Ages, The Colonial Period, or some Fantasy Counterpart Culture thereof, but when you look closer, you find polyester, robots, or other high-tech toys in between the horse-drawn wagons and wattle-and-daub buildings. There's generally no rhyme or reason for which technologies are anachronistically present besides the Rule of Cool. Sometimes these may be leftovers from a lost technological civilization, or perhaps it could be that science developed along a different path than ours, allowing for more advanced technology in one field, while stagnating in others, but most of the time there is no explanation whatsoever for the bizarre mix of medieval and futuristic.

Schizo-Tech is a key component of Punk Punk. It's also the foundation for Fantasy Gun Control. Compare Decade Dissonance for when one side has all the cool toys. When a story nominally set in a real-life historical period has this problem, you've got yourself some tasty Anachronism Stew. It may be because an isolated branch of mankind created an Advanced Ancient Acropolis. After the End is normally a good justification of this, especially when you have a faction with Low Culture, High Tech.

When evaluating a candidate for this trope, try not to confuse anachronisms with non-western-isms. For example, a kimono can be just as modern as a three-piece suit, if not more so. Likewise, do not confuse anachronism for cosmetic purposes with anachronism of technological capability. A judge wearing an eighteenth century robe and wig while judging cybercrime cases is not Schizo-Tech, but simply a Shout-Out to the Good Old Ways. And again, Tropes Are Still Not Bad. It's also worth noting that in the alternate history of a candidate, the culture and style may simply be different, so why their older architecture may seem jar with their higher levels of technology, it may be that that style of architecture may just be "in" at that time.

Beware: Many sci-fi settings that aren't harder than diamond can become this if you think about it too hard.

Retrieved from "https://allthetropes.org/w/index.php?title=Schizo-Tech&oldid=1960394"
Categories:
Cookies help us deliver our services. By using our services, you agree to our use of cookies.