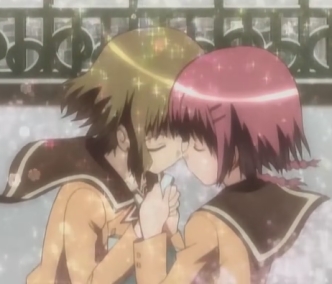 The Japanese believe that young girls are expected to have friendships with each other that emulate boyfriend/girlfriend relationships. This is considered safer and temporary in a world where where virginity is highly valued at least concerning fictional characters and where a girl is believed to be incapable of taking away another girl's virginity. This is known as "Class S" in Japan. This is similar to the Western concept of bi-curious teenagers, though the latter is rather played to demonstrate open-mindedness.

The given cultural explanation is that they can then graduate from these friendships to real relationships with boys, now that they have the confidence and experience. To remain in a "Class S" relationship, however, is seen as a sign of immaturity. If especially overdone, the implication is that the girls should stop being close period, romantically or no. No, this should never become physical that way; it would sully the Incorruptible Pure Pureness. Which is then traded in for marriage.

When this is shown in anime, the Western response is usually bafflement, since they're automatically pegged as Schoolgirl Lesbians because of Situational Sexuality, as well as this conflicting with the Western concept of heterosexual and homosexual identity. (Granted, something that's under spirited debate in the West as well.) When the bafflement wears off, most Western viewers' attitudes start taking a very different turn.

Some viewers have to ask... is this really an accurate depiction of a Romantic Two-Girl Friendship; or did writers use Schoolgirl Lesbians to draw in an audience, and then take the easy way out? Depending on one's interpretation this can lead to the perception of Unfortunate Implications even if author really didn't intend any.

It remains to be seen how this attitude will develop in the modern age, as series get more and more daring. It's noticeable that characters who have actually had sex, or even kissed, are treated much differently than those with chaste relationships.

Examples of Romantic Two-Girl Friendship include:

Retrieved from "https://allthetropes.org/w/index.php?title=Romantic_Two-Girl_Friendship&oldid=1947210"
Categories:
Cookies help us deliver our services. By using our services, you agree to our use of cookies.